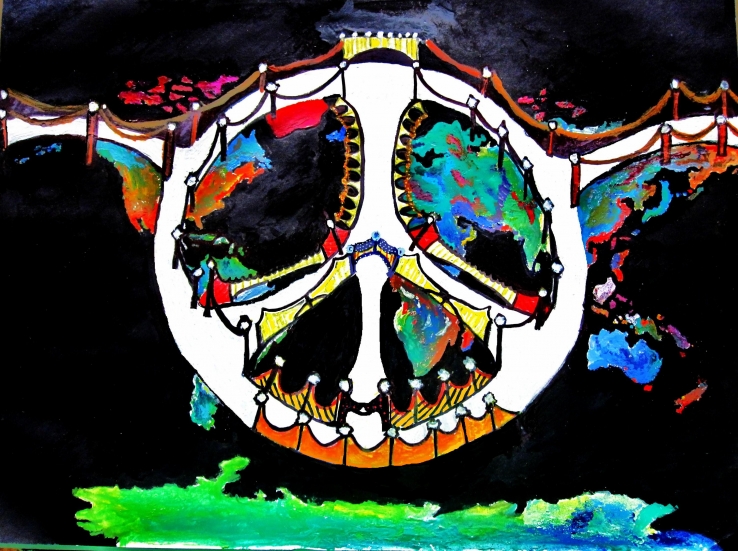 One of the biggest problems in the world right now as described by the iEARN 2010 youth is racial intolerance. This one problem is the root that branches out to become many of the other problems that ravage our world: war and poverty. Only through education and learning of one another’s culture can we bridge the gaps between our peoples. That is the key to world peace. This painting depicts a bridge that connects a diverse world together. All the countries have been painted with a mixture of a variety of colours. This denotes the diversity and beauty that exists in our world. The World Friendship Bridge is an envisioned structure that serves to physically link all the nations of the world. It epitomizes the concept of gaining access to new areas, knowledge and culture as well as nations strengthening their relations with other countries. This would bring about prosperity through trade and new global connections. The bridge symbolizes stability and strength as well as the advancement of technology. The shape of the bridge has been designed to resemble the peace symbol which further highlights its purpose: world peace. In reality, the bridge would connect all the territories of the world. It would be an object of commonality and unification; something that would belong to all nations. The World Friendship Bridge hallmarks the human dream: learning in a globally united world in peace.

Collections OUR YEAR. OUR DREAM. OUR MARK.