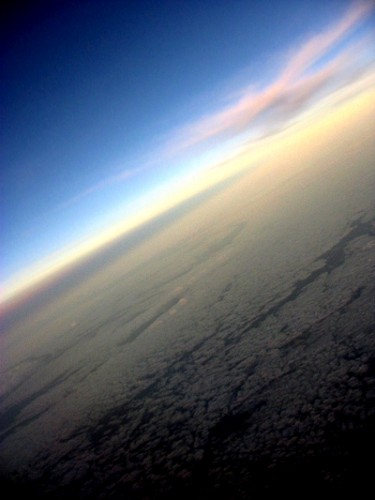 These clouds layers seemd to have been formed as one and separated into layers, like perforated 'cut-outs'. I discussed my theory with my dad, pointing out that the upper cloud wisps fit perfectly into the wholes in the lower layer of cloud... He said it was cool, but that ain't how it works...<br><br>Whatever!<br><br>Leaving Toronto for Sydney via 'Miss Ocean Pacifica'.<br><br>3 years ago I flew 'Jumpseat' in a 747 on a landing in Shanghai. Incredible! Absolutely Freakin Stunning! Alas I had no camera at the time and now frequently annoy my fellow passengers in an obsessive effort to make up for the fact.<br><br>Rows 16 to 40 still offer awesome visions at 30,000ft and I'll have my nose pressed up against the window for hours.