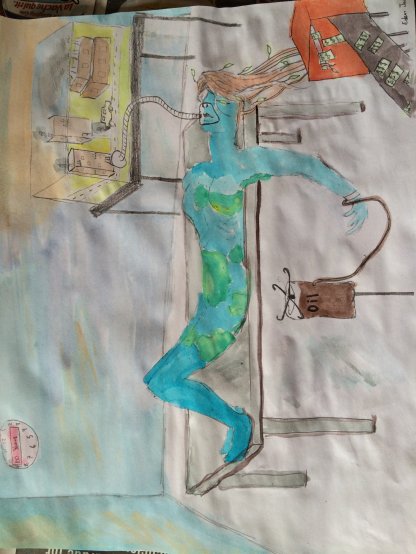 How we abuse Earth

In my picture a woman is coloured like Earth -symbolizing "Mother Earth". She is hooked up to an I.V. that, instead of helping her, is sucking oil out of her. This shows how people relentlessly drain the Earth of it's natural resources without considering repercussions. She is also breathing pollution from a human city out of a face mask. This shows how we are poisoning breathable air. Finally, I chose to depict her hair being turned into money, as hair in many cultures represents power, but in our materialistic society, the power of money is considered more important than the power of nature. By making Earth look human, I am trying to invite feelings of disgust and empathy at the improper treatment of our world. It also alludes to the fact that we are Earth, and anything that happens to it happens to us.