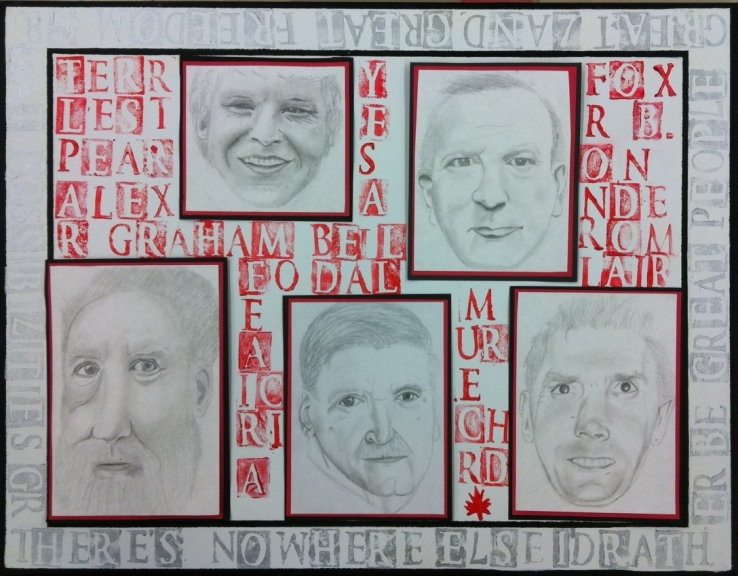 My name is Mary-Catherine Doucet and I am from Bathurst New Brunswick, Canada. When given the challenging task of the art contest in my grade 12 art class, I really thought about what I wanted to do. I pondered about it for a while about making some sort of representation of the comical stereotypes of the Maritimes or Canada. Then one day it hit me… Instead of doing something I could think up within a few Google searches I thought back to my last 12 years in school. I thought of reasons why I’m proud to be Canadian. Yes it would have been 10 times easier and less explaining to my peers who Lester B. Pearson is, had I just slapped on a sketch of Justin Bieber. Yet, I wanted the faces of people who shaped Canada, not just for a couple of love songs but through actions. Therefore I believe I chose come heroic people who have made the title Canada a humble, courageous, intelligent and selfless title to represent our glorious country. My only regret within this artwork is not having the space to pay tribute to the Famous Five women who I believe are a major part of Canada being the way it is; including the reason in why I can be a part of the contest. Given a shortage of canvas on my already large enough canvas I had no choice but to keep my top 5 people in which ended up being: Terry Fox, Lester B. Pearson, Sargent Romeo Dallaire, Alexander Graham Bell and Maurice Richard. Mary Catherine Doucet DOB November 16, 1994 Bathurst N.B.