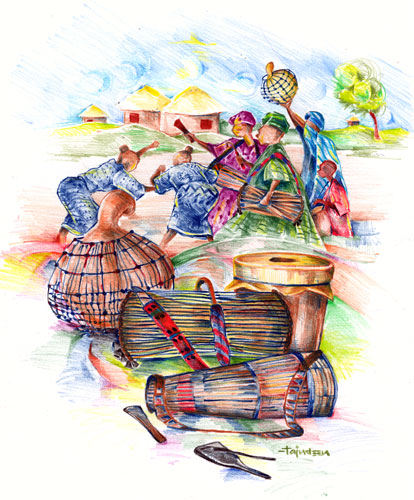 Yoruba traditional musical instruments The painting describes the types of musical instrument used for entertainment during occasions such as naming, marriage burial, housewarming ceremonies in Yoruba land, the south-western part of Nigeria. These instruments are iya-ilu (talking drum), sekere, bata drum, agogo and omele (small drum). All these are at the foreground of the painting. At the background is the typical Yoruba village and way of dancing and drumming during any festival or ceremony where these instruments are put into use with two ladies dancing to the bata, iya-ilu drums, sekere and the omele beats. They all dressed in Yoruba traditional attire. Medium: Color pencil on cardboard