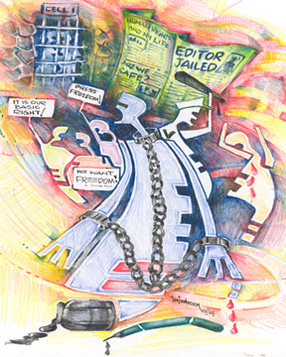 Pen Battle It is a must in every society or community anywhere in the world that want to develop socially and economically to give maximum freedom to the press since it is the mouth piece for the citizens to hear their views to the government and the general public on all issues that concerns them. In some part of the world, most especially the African continent, press freedom is a taboo for so many factors. The government in power in these countries of Africa feels that every aspects of the citizens must be under their control, they are ruling us the way they want, they hate to see us contributing or challenging any of the action taken by them, any newspaper, magazine, private radio or television that dare to criticize them will have their outfit closed down, and the editors jailed. I was once a victim of government brutality when I was working for a local newspaper as a cartoonist. It does the government of that time to the extent that I was on chase for some weeks; my editor was locked up for the same period and was released after the publisher tendered official apology. This is what we are leaving with in this part of the world. Press freedom is NOT a fundamental human right. Artist: Tajudeen Akinwande Medium: Color pencil on cardboard Size: A4