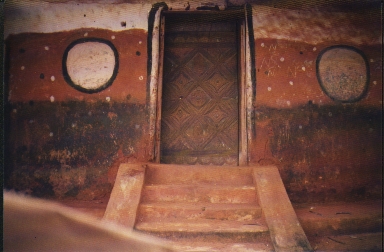 I work as well as seek through philosophical investigation, the relevance of the culture of my people: old vis a vis the reformed. The intermediate gate to the main compound to the Owelle (Traditional ruler) Onyiukes’ compound. Here’s the final passport to the Owelle. Guests who were tested, and confirmed charm and harm-free, could now be given right of entry. The aesthetic carvings on the doors are analogous of the dynasty’s synonymous traits: royalty, obedience and toughness (Onyiuke). The suffix 'Uke' means community, or the majority of people. In a clearer sense contextually, it could mean ones 'Umunna' – kindred. Comparatively, 'Onyia' which suggests dauntlessness gives Onyikes’ royal dynasty a status quo of indomitability. A veritable force indeed to reckon with; such that even when the white man they found him trust worthy and compartible enough to work with. Thus were the regime: Owelle Achuama Odera (18 cen-1917), Owelle Micheal (1918-1928) and Owelle Alfred Nkwocha (1928-1984).