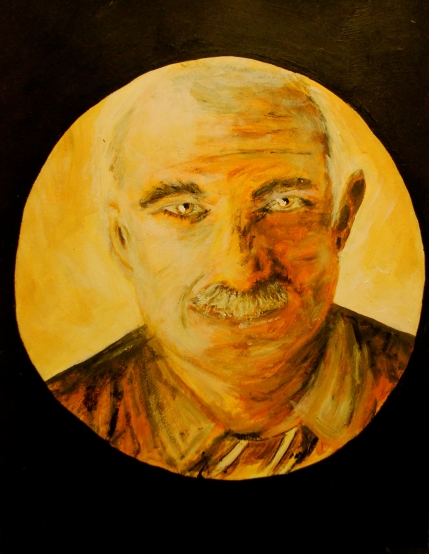 Jack Layton was a symbol of good social policies and sensible politics, but for many became a symbol of hope. Over the years, he had become a symbol of progression for the nation and had a truly admirable character. This painting followed his death as a commemorative project for someone who I familiarized myself with. From the day of his death, five bold words that Layton had written in his final letter to the public before his passing line my wall: “BE LOVING, HOPEFUL, AND OPTIMISTIC”. I was a supporter of Layton and stood for what he believed in. Especially following the last election, my admiration grew after he earned the confidence of millions of Canadians and made history. He was passionate towards politics and was determined to get better. When he announced he was stepping down as leader he said in his statement, “I will fight this cancer now so that I can be back to fight for families when parliament resumes”. Everything Layton stood for, he backed up rather than turning a blind eye. While he thanked everyone in his note for their thoughtful words, many are now thanking him for the impact he had on Canadian Politics and his inspiring words, which he concluded his journey with. Many of his words from his final letter were made into posters created by artists across the nation. His final words hold so much for Canadians and inspired me to paint a portrait of Layton. This painting illustrates my continued support for Layton, the New Democratic Party, and Canadian politics. I am all for social justice, universal healthcare, public pensions, and making sure no one is left behind. In this painting, I focused in on Layton’s face and stress features such as his determined eyes and iconic mustache. In the end, I frame it with a dark black circle, focusing in on his face as a microscope would and representing the idea of there being “light at the end of the tunnel”, referencing the legacy he has left Canadians.