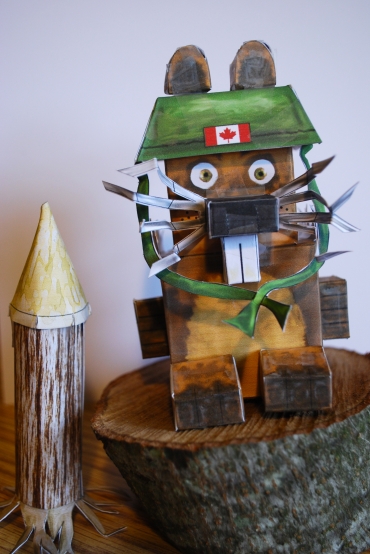 I closely identify myself with a beaver, a national symbol of Canada. As the story below reflects, I often feel like I am a beaver for its many unique characteristics. This is a story about Woody, which reflects my upbringing and identity. Woody isn’t your ordinary beaver. He is proud to call Canada home and enjoys gnawing away at all sorts of trees whether it is dead or alive. He can be found within the large boarders of Algonquin Park located in northern Ontario. Woody works hard and sometimes works overtime to accomplish a task at hand. Like his family, he is shy but adventurous and strong. He is always up for new challenges and willing to help a friend out. When he’s not working, he is either out strolling along the forest floor, swimming from one lake to the next, or taking the occasional break in his self-made dam or lodge located on one of the many rivers or streams. He is a very talented and smart rodent. If he was human, he could be making big bucks putting his talents towards constructing dream homes. Woody’s teeth have been at it for thirty years now. He has learned a lot about surviving the wild while making best use of the materials he can get his webbed hands and feet on. It seems that his teeth are made of rock as he continues gnawing tree after tree and dragging them along to a good new place to construct another dam or lodge. Woody couldn’t tell you how many dams and lodges he has created over the years as he has lost track long ago. Woody likes to have several working dams as he travels around quite a bit. The rare storm here and there will frighten Woody and make him act quickly as he maps out his closest already constructed dam and dives down while he forcefully slaps the water with his broad scaly tail. The sound he creates with his tail sends long warning signals to other beavers in the area. You can count on Woody for support. Referring back to his shyness, Woody is rarely seen as people hike, canoe and swim in the park during the warmer months. His dams and lodges provide him comfort and help to protect himself against the odd predator in the park. Such predators which Woody comes across from time to time include coyotes, wolves, and bears. With the help of his friends, he builds canals to help float building materials and food over land. Woody enjoys working the longer hours during the night under the dark sky, as he has deemed himself nocturnal. Woody is lucky to be alive still after both his mother and father were hunted for their fine fur and meat back in the late 1980’s. He’s got a great sense of hearing, smelling and touching, but not so much seeing. He loves getting his hands on water lily that grows at the bottom of lakes and rivers. This cabbage stalk looking plant gives Woody lots of fuel for tackling long night projects. Woody plays a dominant role in the country’s ecosystem by creating wetlands. These wetlands are beneficial to many other species in which he shares the land with. Woody enjoys being Canada’s national animal and receiving the attention he does. He hopes to continue appearing on the five-cent nickel in Canada for years to come.