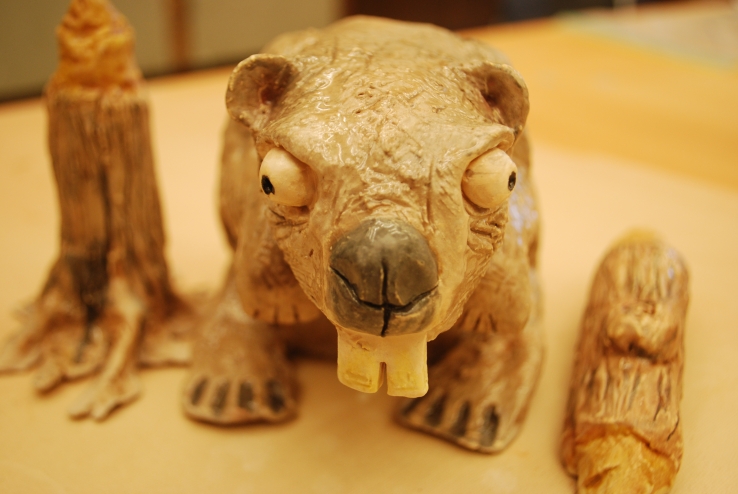 I am a Beaver

Call it a self-portrait; I believe that I am a beaver. I strongly identify myself as sharing similar traits to a beaver. Before jumping into this piece, I listed a bunch of qualities of a beaver. As the list got longer and longer, I was beginning to convince myself that I was closely associated with this animal that was known for its hard work, love for the wilderness, and to top it off, a symbol of Canada – a country I call home. Many cultures relate to animals, symbolizing special qualities and personality traits which guide people through life. After doing some further research, I have learned things about beavers that I never knew of before. We often don’t see beavers out in the wild, but we do come across clues that tell us they have been in certain places. The first time I thought I may have a chance at catching a glimpse of a beaver was when I saw gnawed trees along a river in Southern Ontario. As much as I lingered around, I did not see an actual beaver. It was not until a couple of summers ago that I saw a beaver wobbling away from me as I approached a creek in Northern Ontario. I got excited… real excited! We may never see beavers because they are nocturnal, but they are also shy. I can relate this to myself as I often will find myself staying up late at night and working away. Also, there are times when I can be shy (but I don’t think AS shy as a beaver). Beavers are always on an adventure collecting wood to construct lodges and damns. Like myself, I’m a pretty active guy, especially when it comes to the summertime. Like beavers, I love building things with my hands. In addition, I love being around the water, if not in it! There are many traits that I could say I share with Canada’s national animal, all of which I am proud of. The beaver and its continuous work can help inspire and guide me to continue working hard in school. When it came to constructing my beaver, I tried hard to make it look as real as possible. I decided to play with proportion/distortion to stress certain physical features that make up beavers. Creating this ceramic beaver sculpture allowed me to further experiment with various textures such as bringing out a scaly tail and fur-like body.