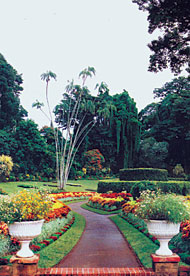 On the director’s desk at Peradeniya Botanic Garden is a souvenir snow dome that, when shaken, sends a shower of plastic flakes over a model of the Palm House at Kew. It’s a reminder that the seeds for this prime Sri Lankan tourist attraction were sown far from tropical climes, in chilly west London. During colonial times the British government sought potentially lucrative crops and experimented by procuring seeds abroad, growing them into seedlings at Kew Gardens, then dispatching them to offshoot enterprises in the colonies. The traffic-clogged Kew Road in Colombo marks the site of a 3ha (7 acre) garden set up by the British government in 1810; a new garden was created at Peradeniya when botanists realized the warm, moist air of Ceylon’s hill country offered better growing conditions. Today, Peradeniya’s layout betrays its colonial roots. Contained within a loop of the Mahaweli River are palm walkways, a lawned circle ringed by endemic and exotic trees, spice and medicinal gardens, and a lake around which towering black bamboos creak eerily. Botanist Gayani Fonseka takes me on a guided tour. There is the aptly named cannonball tree, which has brown spheres covering its trunk; the rum rum tree, whose green fruits are used to make musical instruments; and the kalukanda, one of three Sri Lankan natives now only found at Peradeniya. Around the Grand Circle are trees donated by dignitaries, including a Krishna fig planted by Queen Elizabeth II in 1954. We wend our way from the Great Circle to a wide, open lawn and duck under a vast Java fig tree. Its branches sprawl across an area the size of seven tennis courts; sitting beneath it is like being enclosed in a one-tree forest. From here we cross an avenue of coco-de-mer palms where couples share picnics on shady benches, skirt the lake carved in the teardrop outline of Sri Lanka, and arrive at a pair of trees with pinkish bark. Their nondescript appearance belies their importance. They are believed to be remnants of the first rubber trees grown outside South America, and came from seeds surreptitiously gathered in 1876 by Henry Alexander Wickham in Brazil, grown into seedlings at Kew and then dispatched in 40 wood and glass cases to Colombo. A faded letter in the archives at Kew confirms the safe arrival of the precious Hevea brasiliensis. Headed “RB Garden Peradeniya, Ceylon”, it reads: “My dear Hooker, You will be rejoiced to hear that the Heavea (sic) and castilloa plants have arrived in very fair order . . .” A plantation was later established at Henerathgoda Botanical Garden between Kandy and Colombo, where more of the original trees remain. In 1877, 22 seedlings were sent on to Kew’s garden in Singapore where they gave rise to 8,000 plants. By the turn of the century, a million acres were cultivating rubber. The majority of natural rubber used today can be traced back to seedlings propagated at Kew and nurtured in Peradeniya