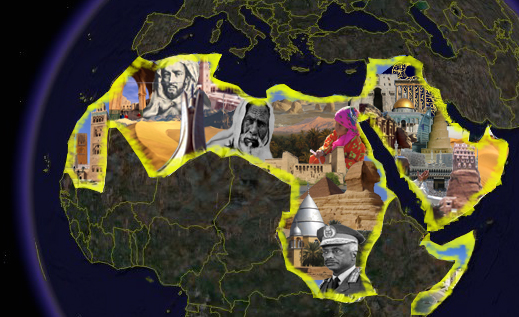 The Arab World consists theoretically of 22 countries: Morocco, Mauritania, Algeria, Tunisia, Libya, Egypt, Sudan, Djibouti, Somalia, Comoros, Yemen, Oman, the United Arab Emirates, Qatar, Bahrain, Saudi Arabia, Jordan, Palestine, Lebanon, Syria, Iraq, and Kuwait.. While all of these countries share so much in common, in terms of language, religion, culture, and lifestyle, each country, and even each region of each country, has its own uniqueness.. This piece of artwork represents some highlights reflecting the historical, geological, and cultural identities of the main regions of the Arab World. In the "Maghrib" or the western part of the Arab world, I put some important icons such as the Koutoubiya Mosque in Marrakech, El Hassan II Mosque in Casablanca, the 'Uqba ibn Nafi' Mosque in Kairouan, the Tower of Algiers, Sidi Abdelkader of Algeria -the famous leader of the Algerian resistance against the French occupation-, and 'Umar Al-Mukhtar of Libya -the famous leader of the Libyan resistance against the Italian occupation-.. In Egypt and Sudan, I put some scenic views of the Nile valley and the Sahara, as well as some historical icons such as the Temple of Philae, the Sphinx, the grave of Al-Mahdi of Sudan, a bedouin child from Sinai, and Rahman Siwarul-Zahab of Sudan (A political leader in Sudan who resigned after being in complete power, as soon as he had set grounds for a true democracy in Sudan). In the Asiatic part of the Arab world, or "Al-Mashriq", I put several icons, such as the Holy Kaaba in Mecca, the Dome of the Rock in Jerusalem, the temple of Baalbeck in Lebanon, the Valley of Petra in Jordan, the Castle of Aleppo in Syria, the Burj Al-'Arab tower in Dubai, the Mosque of Samarra' in Iraq, and the Kasrul Imam in Yemen.