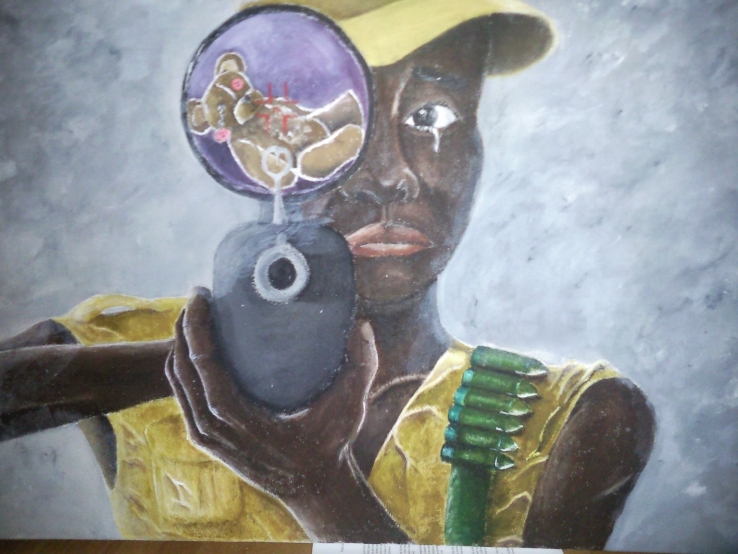 Shootin Down My Childhood

Brian Jeong Social Concern Painting: “Shooting Down My Childhood” Artist Statement Did you know that children as young as 8 years old fight in wars holding guns that we may only see in video games? Since 2001, the participation of child soldiers has been reported in 21 on-going or recent armed conflicts in many regions of the world. These children are usually poor, displaced from their families or lack in education. These children are easily drawn into wars as children are easily manipulated by violence and do not know the true identity of war. Due to this, many children remain in shock even after leaving the armed forces because of the violence that they witnessed at such young age. These children will not have any pleasant memories of their childhood which is supposedly the happiest time of one’s life. Through this painting I hoped to convey the message that the world is taking advantage of the children’s naivety to obtain and satisfy their greed. Due to this children lose their dreams and are lured into a brutal and violent environment that they cannot undertake. I believe that no one in the world has the right to contaminate the childhood of any child in this world. In order to convey this idea, it took me various thumbnails to create this composition. I chose to place a child in the middle and the gun pointing to the front because of its impact on the viewers. I believed that this would catch the viewer’s eyes and create some kind of an emotional collision and impact. The purpose of the gun pointing at the viewer was to create emphasis and also to bring the viewer into the painting as part of the composition to truly feel the emotions of the painting. From this impact viewers may think of the social issue again and may be understand and comprehend the severity of the issue. The teddy bear in the scope of the gun also has a meaning to it as it shows that the child is aiming at the teddy bear. The teddy bear often symbolizes childhood; however as shown, the teddy bear has been ripped and wrecked. The shredded teddy bear represents the destruction of the childhood of child soldiers. As for the actual child I ranged the age from 10 to 13 as it is a common child soldier age. I also decided to pick his ethnicity as a black African child as child soldiers are mostly occurring in that region. I matched the hat the vest to create a uniform like a costume to show that he was in the armed forces under control of some body. The purpose of the tear in his eye was to also create emphasis on the emotion of the child. The background resembles smoke and mist. The background was done this way so that the child has dominance in the painting and also to create the emotion of loneliness. Overall I believe my painting was successful in delivering the idea of child soldiers and its severity. However I believe my painting skills need to be improved to give the viewers a better understanding of the painting as a whole.