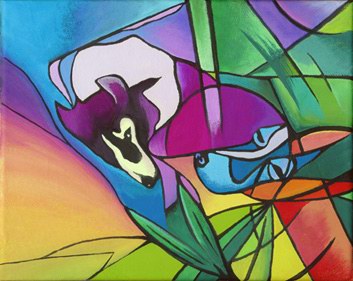 Ruby was fourteen and this portrait was intended to capture the extremes of her personality, which veered between a mania for games and utter exhaustion. Playfulness and freedom of spirit are represented by vibrant colours. To the left, Ruby is depicted awake, but about to surrender to sleep. To the right, she is inquisitive with tilted head and raised sensing ears. Their orange colouring suggests a state of sensory excitement while a complementary blue colours most of her head and suggests a great deal of mental processing and intelligence. This Ruby is painted in a reasonably cubist style, a deliberate nod towards primitive art in order to convey the universality of animal impulses and instincts. To the left, the more sedate Ruby is depicted. Although actual black and white markings define her shape, she is coloured with purples that veer towards magenta. This suggests contentment, warmth and sleep. Nearby, a dreamy blue again suggests much mental activity, but less conscious this time. She snuggles into her bed with legs curled in tightly, still watchful but perched precariously on the edge of sleep. A pale sandy orange creeps in nearby to represent comfort. Green leaves feature here and there to represent her love of the outdoors etc. A circle is used to unite her sleeping body with her alert head, gathering them together as one.