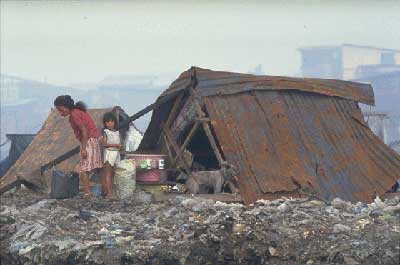 The Philippines, made up of a group of many islands, is a land of considerable beauty yet there are many contrasts. The countrys wealth is not evenly distributed and a large percentage of the people live in poverty. In 1991, 40 percent of households lived in poverty. This has fallen to 32 percent in 1997 (World Bank, 2000). This still equates to millions of people living in urban slums or in rural areas that lack sanitation, safe water and other services that we take for granted. The challenge is to reduce poverty in light of a rapidly growing population. <br /><br /><br /><br /><br /> <br /><br /><br /><br /><br /> Due to the poverty and lack of opportunities in rural areas, each year many people migrate to the cities looking for better economic opportunities. Most families are impoverished and children are often forced to earn an income. The types of jobs include selling items such as newspapers, cigarettes and lollies, or odd jobs such as car-washing, hauling or domestic work. Other possibilities include working in factories, construction sites, ports or small backyard industries, while some resort to scavenging or begging<br /><br /><br /><br /><br />