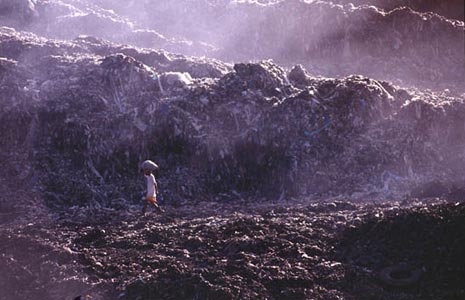 The capital of The Philippines, Manila is home to some eleven million inhabitants. It understandably suffers from many of the same problems that aflict cities of its size all over the world - poverty, crime, grid-locked traffic, polution etc. Of these, the polution problem is made worse by an infrastructure lagging years behind Western standards. In particular, the citys garbage has for many years been taken to the outlying suburb of Payatas, where it is dumped and openly incinerated. Locals call it Smoky Mountain because the air is constantly thick with smoke from the incineration; the stench is so strong, its bearable for just a few moments at a time to outsiders. I was physically sick after taking these photos, for which I spent about two hours at the site. Ironically, the official name for the area translates into English as promised land.