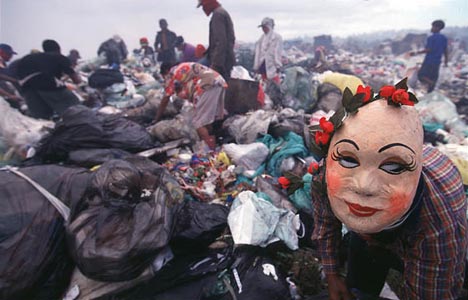 Originally planned as a landfill site, the garbage eventually filled the pit created for it, and now rises over thirty meters in places. Smoky Mountain is home, workplace and playground to about eighty thousand and rising people. Other Filipinos call them ang mga taong nakatira sa tibi ng basura, which, in Tagalog, literally means people living next to garbage. They seek out a living by scavenging through the garbage and salvaging whatever can be sold as scrap or recyclable material. The average family earns about one US dollar a day for this work - not enough to feed itself. There is even a local group - The Scavengers Association - for the people who live here, part of the Philippines Homeless Peoples Federation. Even Charles Dickens and Victor Hugo couldnt portray poverty and destitution on this scale.