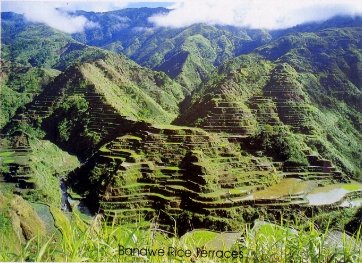 Over two thousand years in the making, the Banaue rice terraces are often referred to as the eighth wonder of the world. As landscapes go, there can be few more spectacular and breathtaking than those around Banaue in the Central Cordillera mountain range on the island of Luzon. Remote villages, mysterious headhunting tribes and, of course, the terraces themselves will intrigue any visitor to the Philippines to explore the magnificent natural surroundings of Banaue. The Ifugao tribespeople who created and farmed the terraces in order to supply their staple crop of rice have in doing so left behind an architectural masterpiece. The fact that they were constructed using only primitive tools and bare hands makes the terraces even more astounding. The view from our hotel was magnificent, but when we went up to the viewpoint in Banaue, their full marvel lay before us. They need constant upkeep but unfortunately todays young generation no longer feel the need to farm rice so the terraces are increasingly left to ruin. We could only imagine how awesome they must have looked when being fully utilised. After seeing the terraces, we visited some of the small villages around Banaue where, unbelievably, the residents still live in the same thatched huts as their ancestors. Every mountain tribe has their own type of dwelling. The Ifugao house is built on stilts with a pyramid roof made of straw. In the nearby village of Tam-An the people still carry on traditional crafts such as weaving and woodcarving, although now it seems mostly for tourists. For a few pesos an old woman (her stooped back a sign of the years she spent working the rice terraces) sold us a traditional headband that she was weaving. As we wandered further, a lady approached us and asked us if we would like to look at the bones. Intrigued, we followed, and she produced a large bundle wrapped in a blanket that she unfolded to reveal the skeleton of her Grandfather, Po Po. Death is a cause of celebration in the Ifugao culture. When a person dies their family hold a huge gathering for many days before the body is buried. Six years later the bones are dug up and another celebration follows, then the same happens again after another six years. It is only then that the dead are finally laid to rest. That such traditions are still being carried out was quite amazing to us and we found the villages truly fascinating. Reaching anywhere around Banaue involves walking up or down mountain paths that at times can be hair-raising. We came totally unprepared, with no walking boots or waterproofs, not even a jumper between us! It rained nearly our entire stay, which can make the terrain quite slippy but we were feeling brave and headed for the village of Poitan. Poitan specialises in making traditional woodcarvings and is located right in the heart of the rice terraces surrounded by magnificent scenery. As we wandered through the village, wild pigs and chickens roamed freely, as men carved wooden figures under the shelter of their huts. The villagers were eager to show us their creations and were making bowls for the tourist trade, but it was the Bulul figures, or rice Gods, that really caught our attention. These sacred figures, carved in male and female pairs, are ceremonially bathed in animal blood before being placed outside of the village rice store during harvest time. They are said to both protect and miraculously increase the yield inside the storehouse. We succumbed to temptation and bought a spooky looking pair for a souvenir, which we were told by the villagers were thirty years old. This, of course, increases their value but they were still only a little over 100 dollars