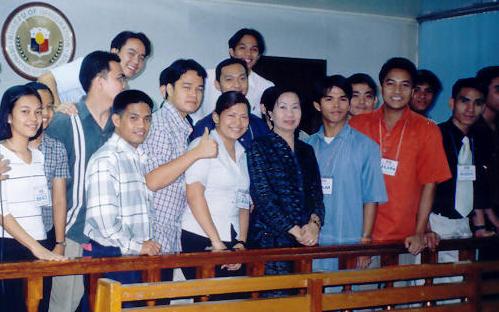 lmost everyone knew that Andrea "Didi" Domingo was not a newcomer to the Bureau of Immigration (BI) when she was appointed in late January this year. She held the same post from 1989 and 1992 when she was convinced to enter politics and ran for Congress. She won that election and became a congresswoman, representing the third district of her home province in Pampanga, not knowing that nine years later, she would return to the bureau and complete whatever unfinished task she left behind. Born on November 30, 1949 in what is now known as the City of San Fernando, Pampanga, Domingo studied at the San Fernando Elementary School and the Pampanga High School. She later enrolled in the University of the Philippines where she finished a degree in journalism and took up master's course in communication research. After college, she started her career at the Development Academy of the Philippines where she was a project officer and director from 1974 to 1977. From 1978 to 1985, she was employed as Director of manpower development and corporate planning at Dynetics, Inc. She served as a consultant of the Board of Investments, then of Prime Minister Cesar Virata from September 1985 to March 1986 and later bacame consultant to the Bureau of Customs. In 1987, she became officer-in-charge of the President's committee on public ethics and accountability. Commissioner Domingo first joined the Bureau of Immigration in July 1988 as head technical assistant to then Commissioner Miriam Santiago. In July 1989, President Corazon Aquino named her Acting Associate Commissioner. She was named BI commissioner four months later. After more than two years as Bureau Chief, Commissioner Domingo was approached by Pampanga Gov. Bren Guiao who convinced her to run for Congress because the latter could not find a candidate who could better represent the third district of the Province in the administration ticket. The commissioner, who had no previous political experience, was naturally hesitant to accept the challenge but she was prevailed upon to change her mind by then President Aquino who campaigned hard for her and helped her win the election. After finishing her three-year term in Congress, Commissioner Domingo was prevailed upon by House Speaker Jose de Venecia to join him as his Chief of Staff and Consultant. During this time she also wrote a column for Money Asia and the People' Tonight and worked briefly as consultant to the Philippine Tourism Authority and Department of Budget and Management. After the 1998 elections, Domingo rejoined the private sector by establishing her own consultancy firm. She also became active in civic and community-oriented projects which she zealously pursued under the auspices of the Domingo Foundation which she founded. She hosted a weekly show dubbed "Iba Ito" at a local TV station in Pampanga and continued to remain active in politics as chairperson of the Lakas NUCD chapter in the province. Aside from her activities as chair of the Domingo Foundation, the Immigration chief is also active in the Ang Bagong Filipina Foundation and Joint Development for Peace and Progress Foundation. Only recently, she initiated the Kabisig project, a community outreach program that involves the conduct free medical and dental missions and other charitable services for the indigent families of Manila twice a month. Aside from excelling in both her private and public life, Commissioner Domingo is a happily married woman for 33 years to Rolando Narciso Domingo, whom she first met in college at age 17 and whom she married the following year. They have three children - Rolando Enrique, Karl and Karen - and four grand children, Gabrielle, Ignacio, Klaysse and Vincent. The eldest, nicknamed Eric, is an accomplished opthalmologist who is a graduate of the UP College of Medicine and has been appointed Assistant Secretary of the Department of Health. Karl, on the other hand, is an entrepreneur, while the youngest, Karen, is currently a law student who also graduated from the UP Manila with a course of hotel and restaurant management.