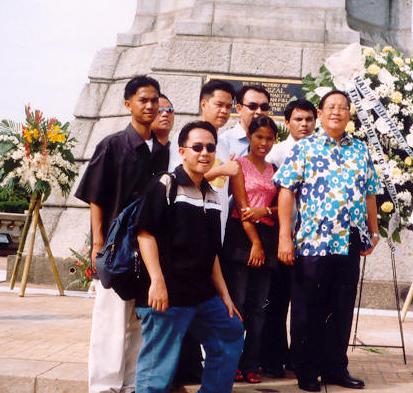 Former Senator and Secretary of Education Raul S. Roco, son of a farmer and a public school teacher, finished high school at 14 in Ateneo de Naga and at 18, graduated AB English, Magna Cum Laude, at San Beda College. He received his Bachelor of Laws as Abbots Awardee for Over-all Excellence also at San Beda College. He took his Master of Comparative Law as a University Fellow at the University of Pennsylvania where he was cross-enrolled at Wharton for Multinational Studies. He was conferred seven Ph.Ds by various universities. Roco was the youngest president of the National Union of Students of the Philippines (NUSP) in 1961 and was one of the Ten Outstanding Students of the Philippines in 1964. He was the youngest Bicolano delegate to the Constitutional Convention and the youngest president of the Integrated Bar of the Philippines (1983-85). As legal staff of Sen. Ninoy Aquino, he drafted the Study Now Pay Later Law. He wrote the lyrics of the San Beda College Alma Mater Song and was editor of The Bedan. He was executive producer of Lino Brockas award-winning Tinimbang Ka Ngunit Kulang. Inspired by his strong beliefs in hard work, study and prayer, he wrote the song Kaunting Dasal. Representing the 2nd District of Camarines Sur, he was adjudged by the Ford Foundation and the UP Institute of Strategic and Development Studies as First in over-all performance among legislators at the Eighth Congress. As Senator, Roco was considered the Father of the Bangko Sentral. He liberalized the banking industry and strengthened the Thrift Banks. He authored the Intellectual Property Code and the Securities Regulation Code. Raul also funded the increment mandated by the Magna Carta for Public School Teachers for retiring public school teachers. He funded teacher's cooperatives. He pioneered the computerization program for state universities and colleges and the public schools. He gave meal scholarships to poor students at the Philippine Normal University. He abolished the NCEE to give opportunity to students to enter college. Called the Honorary Woman, Roco authored the Women in Nation Building Law, the Nursing Act, the Anti-Sexual Harassment Law, the Anti- Rape Law, and the Child and Family Courts Act. He prioritized women in the DECS literacy program. He abolished double taxation on overseas Filipinos and was consistently cited Outstanding Senator. For his exemplary performance in the Senate Impeachment Trial, he was awarded the Bantay Katarungan Award. As Secretary of Education, Raul implemented for the first time, free public primary and high school education. He protected teachers welfare, ensured prompt payment of their salaries, prohibited illegal deductions and campaigned against the 2% service fee deducted by the payroll group from teachers pay. He implemented the long delayed Basic Education Curriculum (BEC) which focused the child on Reading, Riting, Rithmetic, Science and Makabayan. He is the president of Aksyon Demokratiko party. He is married to Sonia Cubillo Malasarte of Bohol, the Most Outstanding Student of the Philippines in 1964. They have six children and four grandchildren.