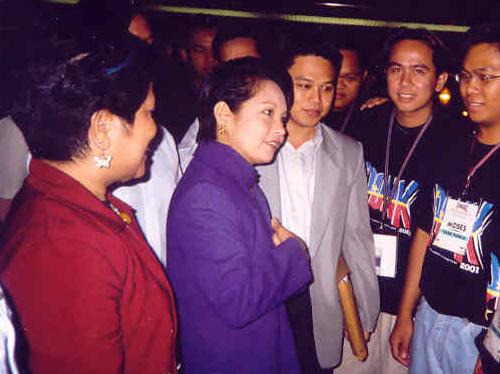 The President is the daughter of the late President and Mrs. Diosdado Macapagal, who were well known for their integrity and simple but dignified lifestyle. Under the term of her father the Philippines was second only to Japan in economic development in Asia. Upholding the high standards of her parents, President Macapagal-Arroyo was high school valedictorian in Assumption Convent, Magna cum Laude in Assumption College, and a Deans List Student in Georgetown University in Washington, D.C. She is a Doctor of Economics. During the administration of President Corazon Aquino she became Undersecretary of the Department of Trade and Industry. She became Senator in 1992 and authored 55 laws on economic and social reform, earning the honor of being named Outstanding Senator several times and cited as one of Asia's most powerful women by Asiaweek. She was elected Vice President in 1998 and won with a margin of more than 7 million votes over her nearest rival, the biggest margin in history. President Gloria Macapagal Arroyo is an economist, educator, journalist, and public servant, the daughter of a well-loved national statesman. She was elected Senator of the Republic of the Philippines on her first entry into politics in 1992, and in 1995 garnered the biggest number of votes ever received by any candidate for any position in Philippine electoral history. In the last elections, she surpassed another record when she overwhelmingly won the vice-presidency by more than seven million votes over the next candidate, the largest margin attained by any candidate in Philippine history. Gloria is the daughter of the late President Diosdado Macapagal descendant of Lakandula and fondly known as the poor boy from Lubao in the province of Pampanga, who rose to the highest position in the land; and late Dr. Evangelina Macaraeg-Macapagal of Binalonan, Pangasinan. Gloria spent her childhood years in Iligan City in Mindanao where her grandmother resided. Gloria upheld the high academic standards of her parents, graduating valedictorian of her high school class in Assumption Convent. She was consistently on the Dean's List during her two-year college stint at Georgetown University in Washington, DC, where current US President Bill Clinton became her classmate. She graduated magna cum laude from Assumption College with a Bachelor of Science in Commerce. She later earned a Master of Arts degree in Economics from the Ateneo de Manila University, and a Ph.D. in Economics from the University of the Philippines. President Gloria Macapagal-Arroyo began her professional career as a teacher at Assumption College. She later became Assistant Professor at the Ateneo de Manila University, and Senior Lecturer at the UP School of Economics. President Macapagal-Arroyo entered government service as an Assistant Secretary of the Department of Trade and Industry during the Aquino Administration. She also became Executive Director of the Garments and Textile Export Board, steering the garments industry to become the top net dollar earner for the country, and rose to the rank of Undersecretary of Trade and Industry. She hosts Dighay Bayan, a television show catering to farmers, which is aired on Channel 4. As the economist in the Senate, Gloria was at the forefront of legislative efforts to build prosperity for the greatest number of Filipinos. She filed around 472 bills and resolutions. Fifty-five of these socio-economic measures have been signed into law, including: the Tax Exemption of 13th Month Pay; the Export Development Act; Loans for Womens Microenterprises; the amended Build-Operate-Transfer Law; the Bank Entry Liberalization law; the Thrift Banks Act; the Anti-Sexual Harassment Law; the Crop Insurance Law; the Indigenous Peoples Rights Law; the Poverty Alleviation Law; the new Rent Control Law; and the Magna Carta for Scientists, Engineers, Researchers and other Science and Technology Personnel in the Government. President Macapagal-Arroyo is married to lawyer-businessman Jose Miguel Tuason Arroyo of Binalbagan, Negros Occidental, the grandson of the late Senator Jose Ma. Arroyo of Iloilo. They have three children, Mikey, Luli, and Dato. Gloria was named outstanding Senator by several associations and publications. She was included by Asia Week in a select list of Asia's most powerful women, and selected Woman of the Year by the Catholic Education Association of the Philippines. She used to be secretary of Social Welfare and Development, but resigned to lead the United Opposition following the expose of Ilocos Gov. Luis Singson linking ousted president Joseph Estrada to jueteng payoffs and tobacco excise tax kickbacks. While DSWD secretary, she introduced the Ahon Bayan (a fund forum that seeks to match donors with the different projects of the DSWD) as well as the Ahon Bata sa Lansangan (an initiative on streetchildren). Her major thrusts then were the expansion of the Comprehensive and Integrated Delivery of Social Services (CIDSS) and the implementation of the Early Childhood Development Projects.