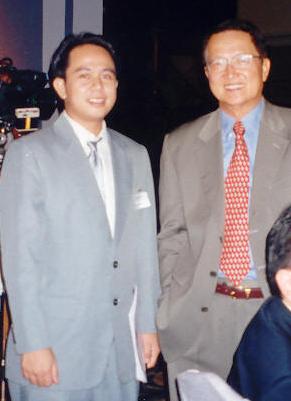 CHOY WITH CENTRAL BANK OF THE PHILIPPINES GOVERNOR RAFAEL BUENAVENTURA

Mr. Buenaventura assumed the position of Governor of the Bangko Sentral ng Pilipinas (BSP) on July 6, 1999, following a long and distinguished career of over thirty years in private commercial banking. Prior to his appointment as BSP governor, Mr. Buenaventura was President and Chief Executive Officer of the Philippine Commercial International Bank (PCIB) and Chairman of various companies of the PCIB Group for 10 years, during which PCIB was given recognition by top business magazines, e.g., Best Bank in the Philippines (1993-1997) by Euromoney Institute of Finance, Commercial Bank of the Year (1994-1996) from Asiamoney, among others. Previous to PCIB, he held senior positions in Citibank from 1965 to 1989, where he served as Chief Executive Officer of Citibank Philippines from 1982-1985, in Malaysia (1976-1979), and in Indonesia (1974-1976). Prior to his departure from the Bank, he was Senior Vice President and Division Executive for Southern Europe from 1985 to 1989, responsible for Italy, Spain, Portugal, Greece and Turkey. Mr. Buenaventura served as President of the Bankers Association of the Philippines from 1994-1997, and Chairman of the ASEAN Banking Council from 1996-1997. He was a recipient of many business awards, including One of Asias Most Outstanding Bankers by Asiamoney in 1991. A Bachelor of Science in Commerce graduate of De La Salle University, Mr. Buenaventura took his MBA at Stern Graduate School of Business, New York University. He also attended the Advanced Management Program at Harvard university/University of Hawaii.