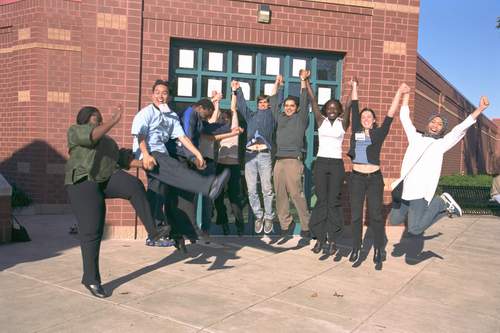 International Youth Foundation and Nokia Recognize Ten Youth Leaders from Around the World with YouthActionNet Awards A 24-year-old Australian working to combat racism in her country, a 22-year-old in Argentina who has mobilized hundreds of his fellow university students as community volunteers, and a 23-year-old in the United States who is building bridges of understanding between American students and their peers in other countries are among ten young community leaders from around the world to receive YouthActionNet Awards. An interactive website created by and for youth, YouthActionNet.org works to inspire and promote youth leadership worldwide. Launched in 2001 by the International Youth Foundation (IYF), a nonprofit organization headquartered in Baltimore, Maryland, YouthActionNet celebrates the key role youth are playing in leading positive change throughout the world. YouthActionNet.org forms a vital part of the "Make a Connection" program, a global initiative of IYF and Nokia to provide opportunities for young people to connect to their communities, to their families and peers, and to themselves. The winners -- ranging in age from 19 to 24 and representing nine countries -- come from diverse backgrounds, but share a similar vision: to promote positive social change in their countries. They were selected following a peer review process in which previous award winners select the next round of awardees. Each is awarded US$500 to support their work, receives visibility through electronic and print materials, and becomes eligible to participate in international meetings sponsored through YouthActionNet. In many cases, award winners plan to use the funding they receive to strengthen and expand their efforts. In Serbia and Montenegro, 21-year-old Ana Popovic will use the award to host a three-day workshop on children's rights, the findings of which will help educate policymakers about current issues facing young people. Muhammad Idrees Khan, a 23-year-old community activist in Pakistan, plans to use the award to expand his efforts to equip unemployed youth with valuable skills training through volunteer service to their communities. IYF first announced the YouthActionNet awards competition in January 2002. To date, applications have been received from more than 1,450 young leaders representing over 60 countries. Recipients are selected on a semi-annual basis, with applications currently being accepted for the next round of awards to be announced in June 2004. To learn more about YouthActionNet.org and for further information on award recipients, visit www.makeaconnection.org.