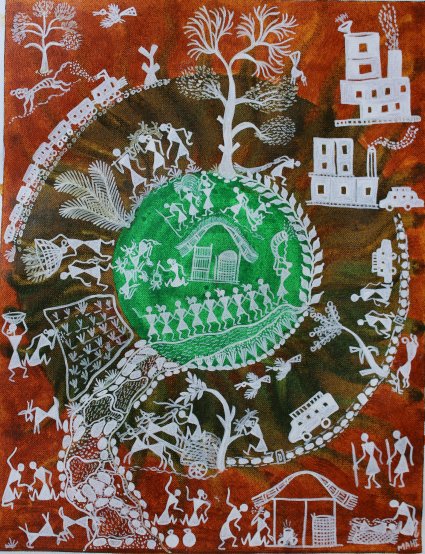 Name of the Artist: Mahendra Umbarsada (supported by Larsen Toubro Public Charitable Trust) Age: 27 Address: Savroli-Patilpada, Talasari Block, Palghar District, Maharashtra, India. Tribe: Hindu Warli. Title: Leave me alone ! A few decades ago, people and animals were staying together happily. But in 21st Century, lot of changes took place on the earth. Industries started growing, number of vehicles increased. Untreated water from industries added in illness. Living organisms started to die. It also affected farming activities, vegetable cultivation. Our peaceful, nature loving tribal community is losing its roots. Warli art is an indigenous art form of Maharashtra, India. The Warli tribe is one of the largest in India, located outside of Mumbai. Despite being close to one of the largest cities in India, the Warli reject much of contemporary culture.This tribal style of art is thought to date back as early as 10th century A.D. The Warli culture is centered around the concept of Mother Nature and elements of nature are often focal points depicted in Warli painting. They greatly respect nature and wildlife for the resources that they provide for life. Warli artists use their clay huts as the backdrop for their paintings, similar to how ancient people used cave walls as their canvases. They use a set of basic geometric shapes: a circle, a triangle, and a square. These shapes are symbolic of different elements of nature. The circle and the triangle come from their observation of nature. The circle represents the sun and the moon, while the triangle is derived from mountains and pointed trees.