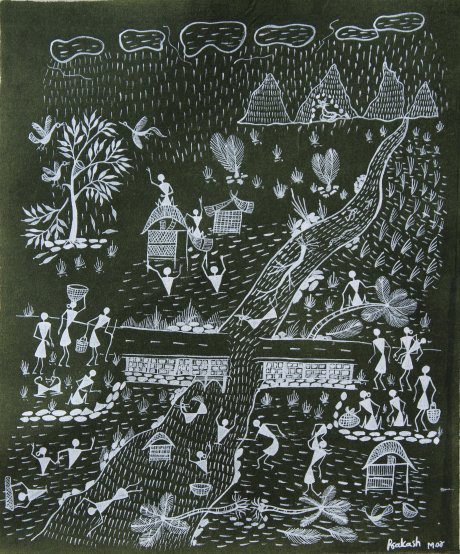 Name of the Artist: Prakash Mor (supported by Larsen Toubro Public Charitable Trust) Age: 23 Address: Chinchale, Dahanu Block, Palghar District, Maharashtra, India. Tribe: Hindu-Warli Title: Water Everywhere…….. We are witnessing heavy rainfall in the past few years; Due to this cities as well as villages get floods which cause loss of lives and commodities. It also destroys public as well as private property; Many bridges, buildings get washed away due to heavy rains. It becomes difficult to travel in public transport, due to that, we are suffering. Our art form is called Warli art- an indigenous art form of Maharashtra, India. The Warli tribe is one of the largest in India, located outside of Mumbai. Despite being close to one of the largest cities in India, the Warli people reject much of contemporary culture. This tribal style of art dates back as early as 10th century A.D. Our Warli culture is centered around the concept of Mother Nature and elements of nature are often focal points depicted in Warli painting. We greatly respect nature and wildlife for the resources that they provide for life. We use our clay huts as the backdrop for our paintings, similar to how ancient people used cave walls as their canvases. We use a set of basic geometric shapes: a circle, a triangle, and a square. These shapes are symbolic of different elements of nature. The circle and the triangle come from their observation of nature. The circle represents the sun and the moon, while the triangle is derived from mountains and pointed trees.