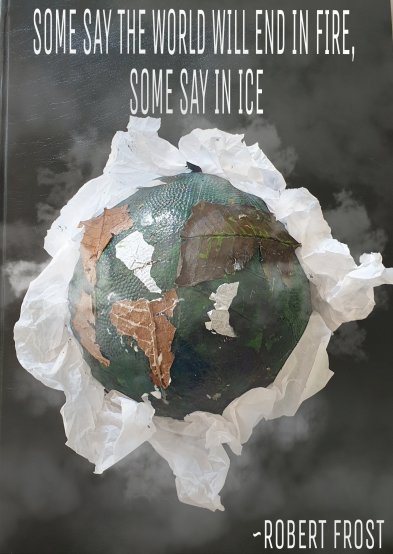 Student of Suncity School, Gurgaon, India The project has been recycled and nothing has gone to waste. As we can see the downfall and complete destruction of the countries are shown by the decayed leaves, when the leaves fall on the ground they gradually lose their shine and wind up to become dust. A few pieces of white are the melting snow caps which are melting due to the massive smoke surrounding the Earth. The quote that I have used" some say the world will end in fire, some say in ice" from the poem 'Fire and Ice' by Robert Frost, isn't only talking about how the earth will die because of environmental issues but also due to the human race; the contrast between the ice and hatred towards everyone and everything a person is surrounded by. And the fire or the fiery desires that are capable of bringing human beings on the verge of destruction. Finally, fire and ice are equally destructive; if one wouldn't destroy the Earth its definitive the other would.