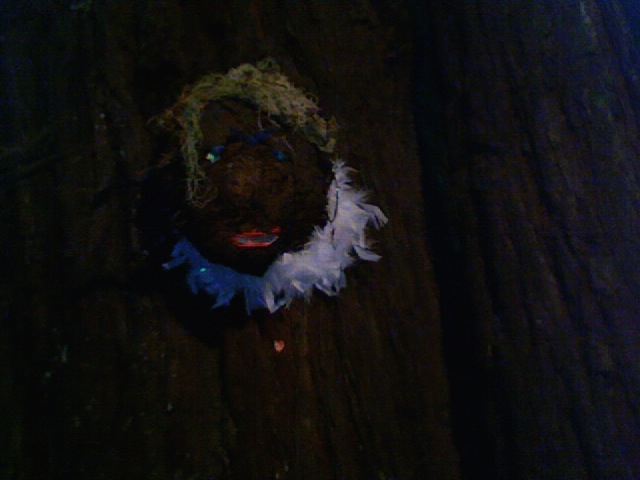 tree with a face 'Mozart'

This summer I discovered a Great Redwood Tree with a face on it. It became famous in the surrounding area in which it stands is surrounded by many more redwoods. I noticed the face looking at me from the mirror which is in front of it. I was brushing my teeth. After that everytime I walked by I couldn't help look at it in amazemet. It was as if the tree were trying to get my attention. Everthing was there. The eyes, the nose, the mouth and even what looked like ears. It was the exact likeness of a face. It was so beautiful I decided to give it a little color. First I added a little blue where the eyes were. Then a little dry grass on top for hair. Pretty soon I couldn't wait to come back and visit the tree! Suddenly, I saw that the face had new things added. Someone else saw it and added a feather collar. A little heart suddenly appeared beneath the white feathers. People began coming to see the tree and admiring the face. Soon it had turned into a a great work of art that had come to life. It's name became 'Mozart'. Mozart lives amongst the redwoods and is protected under California national forest law. He is hundreds of years old. If I only knew some of the stories she/he has to tell. The day before I left casadero ranch I spotted a rainbow at exactly 4:30 in the afternoon dirrectly over Mozarts trunk. The colors were rich and brilliant. streching from side to side where his feet would be if he had feet. The next day I was the last one to leave music camp. I was waiting for it to be 4:30 to see if the rainbow would return. Sure enough little by little a rainbow began to form. I thought to take a picture and found someone with a camera that was just about to leave. He took a photograph of it. We exchanged emails and he left saying that he would send me the pictures. He drove away as I stood there a few others saying goodbye to Mozart.