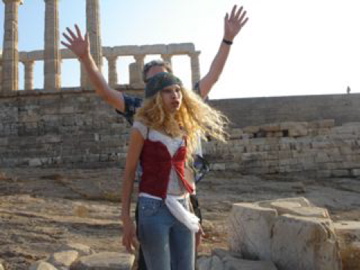 Clarita imagining what it feels like to be the Goddess Athena. The Greek goddess Athena (A-theen-uh), later called Minerva by the Romans, was the goddess of wisdom, battle, and certain crafts, and was the protector of the concept of cities. The olive tree was sacred to her, and her sacred bird was the owl (which is why wisdom is associated with owls). Poseidon, the god of the Sea, and Athena were in competition to become the patron of a new city. Poseidon, as a bribe, gave the first horses to the people, but Athena struck the ground with a rod and up sprang the first olive tree, olives became an agricultural staple for the Greeks. She was chosen as the patron goddess of the city which was called Athens, in her honor.

Collections My trip to Athens