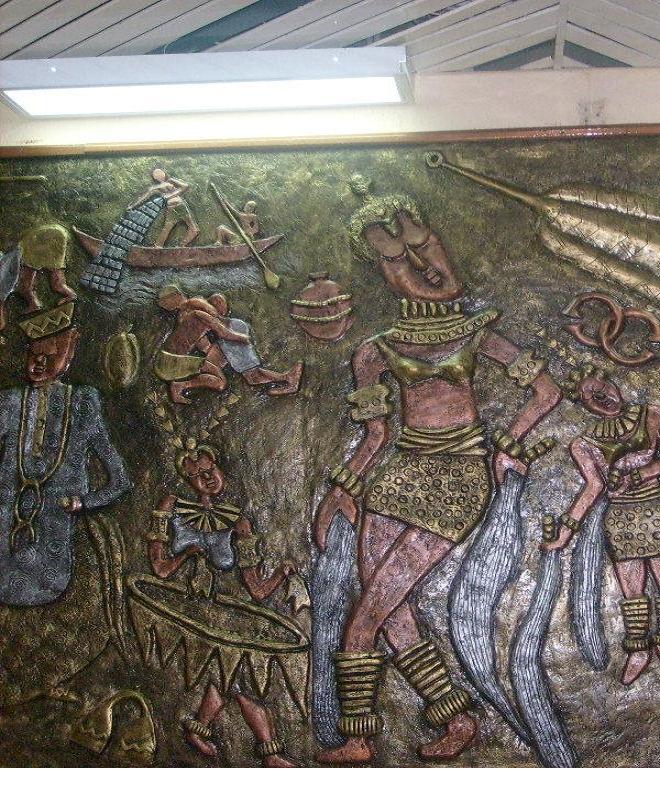 This piece of art is a symbol of the very rich history of the people of Calabar in Nigeria. formerly known as Old Calabar town and port, capital of Cross River State, southeastern Nigeria. It lies along the Calabar River, 5 miles (8 km) upstream from that river's entrance into the Cross River estuary. Settled in the early 17th century by the Efik branch of the Ibibio people, the town became a centre for slave trade (Chains in the Art) between white traders on the coast and natives farther inland (canoes where used to transport goods and human across the river and for fishing that is why it is symobolized in the art work) the people of Calabar are known for their Fish, cassava, bananas, palmoil which is the main cash crops. Culturally the people of Calabar have an indigenous dance known as "Ekombi" which is in honor of the queen of the river Calabar known as "Ndem"( as seen in the art). The history of Slave trade in Nigeria has deep root in Calabar because of the port. Able and dynamic young men, women and children were shipped out from Calabar as slaves with the permission of the traditional rulers of then old Calabar. The salavery left the people devasted and couldnt be abated by then. They only hoped in the future. Today that History is seen in other forms as in child tracficking and the lies of working abroad( an elder or a relative will promise a young lady of offering her a job abroad and will use her as a prostitute overseas meanwhile she will be forced to take an oat not to report to the police or any other person). In the face of adversity we fine hope and we shall overcome!!!!!!!!!! Today Calabar is seen as Tourism hub in Nigeria with Thousand of Visitors visting tourist sites every holiday because of the rich cultural and historical heritage of the people of Calabar. Tinapa Africa's premiere business resort is located in calabar. CALABAR Come-And-live-And Be-At-Rest Long Live Calabar!!! Long Live Nigeria!!!