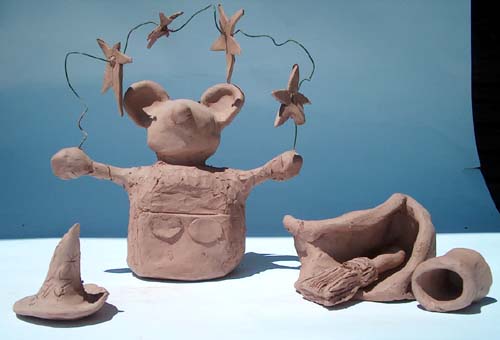 In deciding on which mythic figure in contemporary culture that I was interested in created and exploring, Mickey Mouse and the story 'Fantasia' immediately came to mind. The theme of magic, empowerment and the juxtaposition between order and chaos are all key elements displayed in the sculpture entitled "Playful Possibility". <br /><br /> <br /><br /> The Mickey Mouse figure has extended arms which appear to be both juggling and connecting with stars. Stars are a symbol of hope, dreams and possibility. Although Mickey appears to be connected to a 'realm' of possibility which inspires feelings of empowerment, there are other objects including a broom and bucket which have fallen on the ground. The broom and bucket are arranged in a way that has created a sense of chaos and a projection of tiredness. <br /><br /> <br /><br /> This sculpture captures a moment of a scene in Disney's film Fantasia where Mickey has finished orchastrating the brooms to clean and dance. It was when different objects took on a life of their own. The magic is in the "hat" which is placed on the ground. Because Mickey is not wearing the hat, the power is limited, however a connection to the stars and to possibility is maintained.