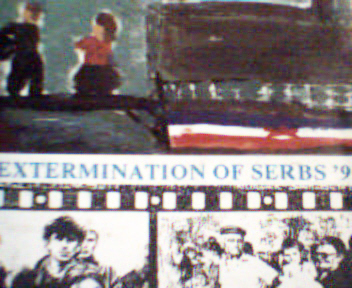 The Two Personal Presents, General Ratko Mladic, Gave To Me On My Summer (2002) Vacation In Belgrade, Serbia. (2002 August) http://lpcyu.instablogs.com/entry/the-two-gifts-books-general-ratko-mladic-gave-to-me-2002-on-my-summer-vacation/ "The next day I woke up around mid morning feeling depressed so I went for a walk to a local store picking up some things. Returning to Darko’s, we were standing outside his apartment discussing something when I turned seeing Mladic approaching me in full military regalia. We shook hands glad seeing each other. Of all photos I’ve seen online, Mladic never looked better than he did then. His military uniform was clean, ironed and he wore every military metal ever earned it seemed to me. He was as honorably decorated as any of the American Joint Chief’s of Staff; even wearing his gold colored in sigma upon his green "special" military cap (I never saw him wearing one like it on any online internet photo). He had many gold colored metals hanging from his uniform on the left side by his chest. I was privileged to see him this way; I confess being impressed. I was surprised to say the very least. Darko said to stand next to Mladic insisting on snapping some photos of the two of us. Mladic placed his arm around my shoulder and I his; we both smiled as Darko snapped some photos. When finished Mladic presented me with a gift. The book I posted online for you all to view, signing it to me under the alias name, Sharko thanking me for beautiful times spent together in Beograd. He was so sweet and respectful to me, an American citizen whose great grandfather was a rabbi in Russia. We embraced and he left as Darko interjected saying we had to hurry to the airport before I miss my flight. " ---------------------------Jil Starr (From My Book/What It’s Like to Chill Out With Whom the Rest of the World Considers As The Most Ruthless Men in the World : Ratko Mladic and Radovan Karadzic Confessions of a Female War Crimes Investigator http://lpcyu.instablogs.com/entry/updated-edition-of-mladic-karadzic-book/ http://docs.google.com/Doc?docid=0AXtI3lWNB1c3ZGhzZGJzMjZfMTdjam5tOHRnYg&hl=en