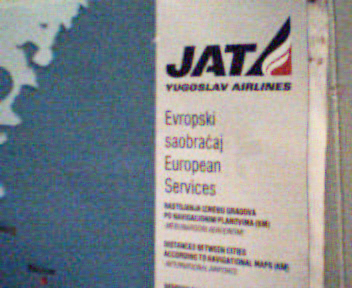 JAT (Yugoslav Air Travel Standards Surpass Even the Saftey At JFK in New York City Post 9/11) Post 9/11, JFK was supposedly safe beyond reproach insofar as security; this proved untrue. I had not traveled outside America in many years so I was unfamiliar with the new travel restrictions on such items as nail scissors etc., being illegal to bring onboard flights and carried several very sharp ones right passed JFK security inspection inside my purse on board out of my own ignorance of new flight rules. It was not until I arrived on my stopover in Paris, France that I was boarding onto a JAT (Yugoslav Air Travel) flight for Belgrade that the security officer of JAT told me that he had to confiscate the aforementioned items owing to new security precautions implemented post 9/11. I informed him upon boarding my initial flight at JFK in New York, the security guards at the gate allowed me to board my flight to Paris carrying them in my purse. The JAT security employee merely shook his head in amazement mentioning something insofar as his seriously questioning American security in general stating that Jugosalv Air Travel obviously took airline and passenger security much more seriously. I loved flying JAT! Not only was I completely satisfied the flight from Paris to Belgrade was many times more secure since JAT searched boarding passengers more thoroughly than JFK, the hospitality, food and drink was excellent. I say this owing to my being a well seasoned traveler having previously visited places such as Indonesia, Thailand and Hong Kong, etc.. It was extremely laid back on the flight. People moved around switching seats and chatting with good friends and the food was the best! My favorite Serbian food and drink were served and all airline employees shoed me the highest level of hospitality. I was extremely pleased with the professionalism and service on JAT I later began an online blog about it on Yahoo360.