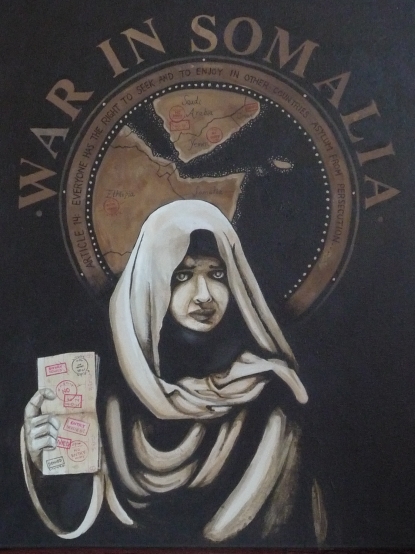 Article 14: The Somali's Struggle for Life

This image depicts a refugee trying to escape the current war in Somalia. As she seeks refuge in neighbouring countries, she is denied entry to wherever she goes, and is forced to return to the hostile environment of her homeland. This is a current issue in the Middle East. Thousands of Somalis flee their homeland each year in hopes of finding refuge from the ongoing war between Somalia’s political leaders. Unfortunately, due to the influx of fleeing Somalis, countries like Yemen are unable to support such a growing number of refugees, and therefore many Somalis are denied refugee status. Many attempt to seek sanctuary elsewhere, such as Saudi Arabia or Oman, but they are also denied because of a lack of refugee policies. With that being said, many Somalis are forced to return to the dangers of their homeland. In this image, I strived to depict the issue of having nowhere to go. This Somali refugee is holding a passport that is covered with stamps denying her entry into neighbouring countries. I wanted to illustrate the grief and concern one would express with having no home, no family, and no one to turn to for help. What makes this a human rights issue is, according to the Universal Declaration of Human Rights, Article 14, which states that “Everyone has the right to seek and to enjoy in other countries asylum from persecution”. These Somali people have a right to escape the political persecution many face in their homeland. What I hope to achieve with this painting is to educate others on the importance of an uncommon human right. Mark Belan 19 Ontario, Canada