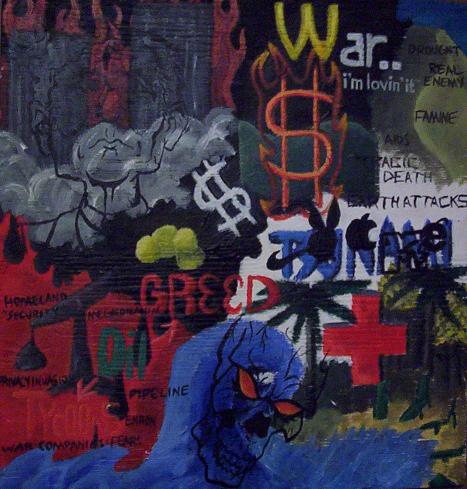 The devastating tsunamis of 2005 shocked the whole world. My school started to fundraise for hurricane Katrina very heavily, and I felt conveyed to express my opinion of the whole situation. At this time, a lot of controversy about George Bush hovered over me and I stood back to examine my perspective of the issue before I began this painting. Although I am not extensively informed on the policies and particulars of President Bush, I feel that my bystander opinion reflects the voice of many other bystanders on this issue. The image of the twin towers that is seen through the outline of the President's figure is representative of how the tragic accident had fueled his powers. How behind him is this image of ominous terrorist activity, and unless his directions are followed, more incidents could come upon us. The golden arches of the McDonald's food chain are twisted upside down to show the twisted way that large corporations are benefiting from war. The slogan also refers to how these large companies are "lovin' it". Underneath the arches is the written word tsunami, covered in black company symbols. The shadows of large companies touch the tsunami but as you can see the red cross is the only symbol right in the middle of the damaged paradise making a significant contribution. All across the painting are symbols for money and oil, two things which are in heavy competition for in the developed world. These symbols are large and colourful, they are eagerly depicted. This is meant to show the global importance over the smaller black words like: Famine, tragic death, real enemy and drought. The skull design over the blue wave shows how I feel that a mask was placed over the tsunami tragedies, to give the illusion of another enemy to fight. To distract the people from the real situations that were at hand, and the enemies at their front door. My overall design of the piece was meant to look cartooned and fake, not realistic. I feel a lot of the problems in the world result from the fake motives, cartooned people and unrealistic objectives like "liberating Iraq...from itself" and "seek out those mysterious weapons that third world countries are bound to have stashed away!". Many of my opinions are highly political in nature and could be offensive, but I’m willing to take the bite of reprimand if my message is loud and clear in this painting.