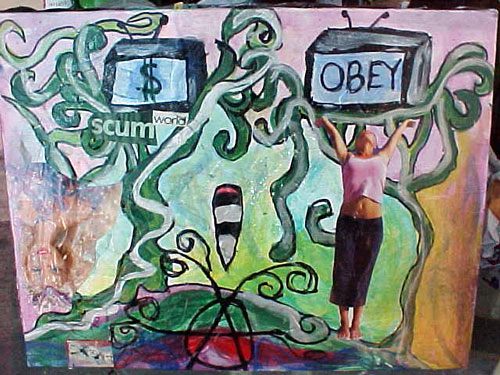 It is a mixed media conglomeration detailing the disenfranchisement of the poor from an increasingly device worshipping materialistic society whose values are defined through surfaces. As a buddhist I have found that in the world of money and illusion, it is the elite scum who rules while the American dream has been kidnapped by the slave metality of fake hipness. You hardly ever see the poor on Oprah, it is a media where they are made to dissappear as if they don't even exist while the populace becomes fixated on face lifts and cars. This is the magical land of consumerism, a veil of lies and hypocrisy made to keep people from helping each other.

Collections Window on the Information Society