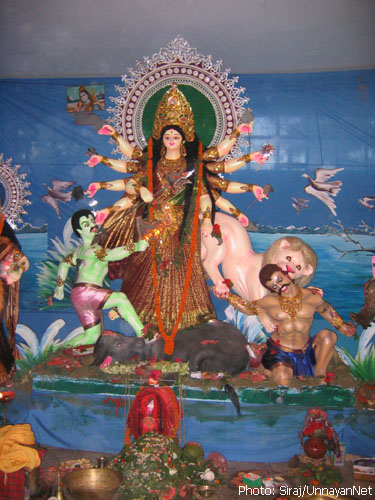 Durga Puja, the symbol of justice

Durgapuja is the biggest religious festival of Hindu especially Banglali Hindu community celebrates every year middle of October. The Goddess Durga is Mother of the Universe, she represents the infinite power of the universe and is a symbol of a female dynamism. Durga is sign of Justice and Peace. Goddess Durga killed the powerful demon Mahish and all his great commanders. When demonic forces create imbalance all god unite becoming one divine force called Shakti or Durga. She is usually pictured as having ten arms holding Sword, Conch, Discus, Rosary, Bell, Winecup, Shielf, Bow, Arrow, and Spear. She is most often shown riding a lion . She is gorgeously dressed in royal red cloth and has several ornaments decorating Her personage. Her hair is dressed up in a crown which then flows out in long luxuriant tresses that are darkly luminous and soothing to the eye. The various tools reflects the eminent supremacy that helps in controlling the universe and obey Her will.