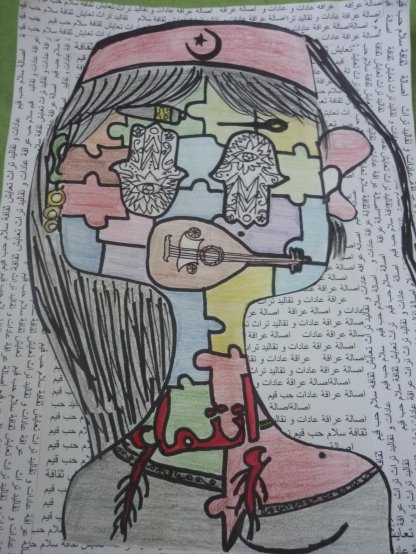 Belonging , our anchor of support !

My artwork approached the theme of Belonging from a cultural perspective , imbued with the Tunisian background that I was reared in . As a matter of fact , I tried to compile in an aesthetic manner our prominent archetypes that best describe who we are . I attempted also to portray their role in mending the fences and representing us , the Tunisian , as an entity and their influence in shoring up our sense of belonging . What I aimed to depict hereby is that we may have different penchants , complexion , gender and also religious preferences and we may even drift apart ( chiefly in this technological era where the virtual world rules , taking its toll on us ) . Still , our identity remains the same , immaculate as it has always been the case . (Diversity justifies the use of colors ) Trademarks of sheer authenticity like the two " Khômsa " were drew in the guise of eyes steerring us along the way and enlightening our path and the "Aoûd "or the Arabic lute that I drew replacing the mouth means that we are no longer constrained to silence , we utter freely what we feel like to say maybe in different dialects but we sure do sing the very same songs in the very Arabic language . Because the language is one of the paramount cornerstones of culture , identity and the sense of belonging , I chose to wrote in Arabic the term "Belonging " in the shape of a necklace rooted in the chest of a Tunisian that I made sure to compartmentalize into two approximately even-handed halves but united under the same Tunisian traditional hat called "Chéchîa" to shun away any gender-biased intentions and reflexions . In a word , our authenticity , traditions and culture is our only warrant for a harmonious community and an enforced sense of belonging .