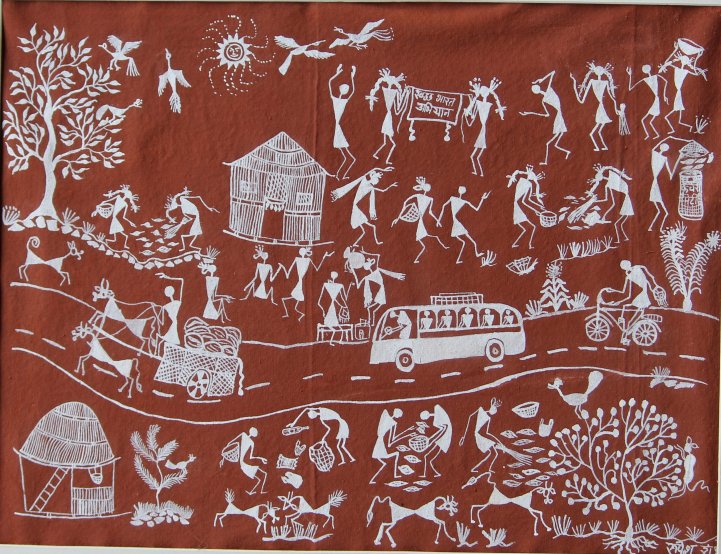 Name of the Artist: Rupesh Randhe (supported by Larsen Toubro Public Charitable Trust) Age: 20 Address: Govarshetpada-Sutrakar, Talasari Block, Palghar-District. Maharashtra, India. Tribe: Hindu-Warli Title: Clear my path. Due to rampant use of plastic, we can see filth everywhere. Our government realized the need of the hour and they initiated ‘Swacch Bharat Abhiyan’ (Clean India Movement). We can see efforts to maintain cleanliness. It will help us to reduce illness. We need to revive our age old practices of reduce, reuse, recycle, for which India has been known historically. Our art form is called Warli art- an indigenous art form of Maharashtra, India. The Warli tribe is one of the largest in India, located outside of Mumbai. Despite being close to one of the largest cities in India, the Warli people reject much of contemporary culture. This tribal style of art dates back as early as 10th century A.D. Our Warli culture is centered around the concept of Mother Nature and elements of nature are often focal points depicted in Warli painting. We greatly respect nature and wildlife for the resources that they provide for life. We use our clay huts as the backdrop for our paintings, similar to how ancient people used cave walls as their canvases. We use a set of basic geometric shapes: a circle, a triangle, and a square. These shapes are symbolic of different elements of nature. The circle and the triangle come from their observation of nature. The circle represents the sun and the moon, while the triangle is derived from mountains and pointed trees.