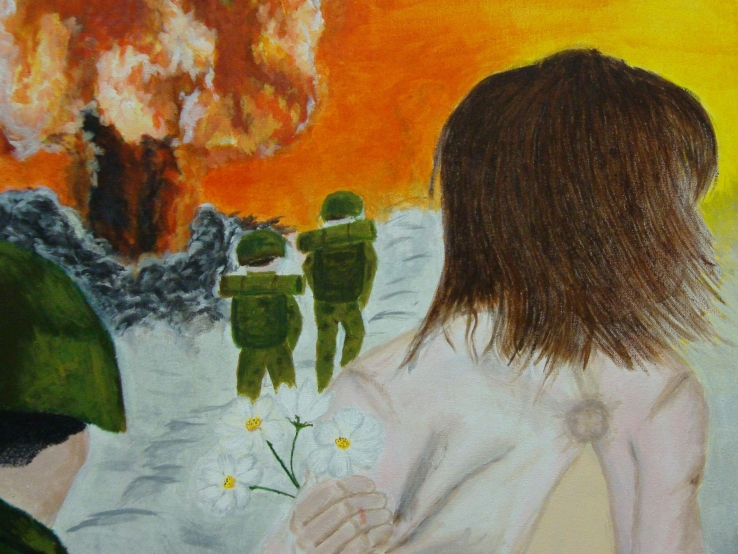 The theme of this painting is war. I’ve titled it “The Silent” because I think that the sufferings of those that are affected by war are so heartbreaking that no word could express it. I also want to express that there are a lot of people don’t have a choice or a say in whether or not to be in war. I hope this painting could translate a conflicting emotion to the viewer, to express the irony of war: the fact that upkeep peace is the mission of those people involved in wars, but yet war is the cause of millions of death. This painting composed of two main things, which are the war scene and the little girl. Soldiers and nuclear explosion are some great representation of war, so I decide to draw them in the painting for the war scene. I used bold solid colour for the nuclear explosion to create stronger emotion. I drew the little girl in the foreground to create contrast with the war scene, the innocence and purity that the little girl portrays help to emphasize the cruelty of war. The white cosmos flowers in the girl’s hand represent peace. There are only a few of them and the girl is holding them very tightly. This symbolized the difficulty of getting a hold of peace. The girl is looking away from the soldiers and the distant explosion; viewers cannot see her facial expression. Is she crying? Is she scared of the explosion? Is she turning away for help? The intention is to provoke viewer to think of the pain of war. I have not chosen a bloody war scene for my painting because I do not want the viewer overwhelmed by the bloody view and overlook the message of the painting. I have chosen to draw a simple painting with only a few figures on it. The girl - the peacekeeper – dressed in light colour is in the foreground, but, viewers will be attracted to the see the solid, vibrant explosion at the back first. This is exactly reflecting the irony that keeping peace is the mission but the focus is always end up at war.