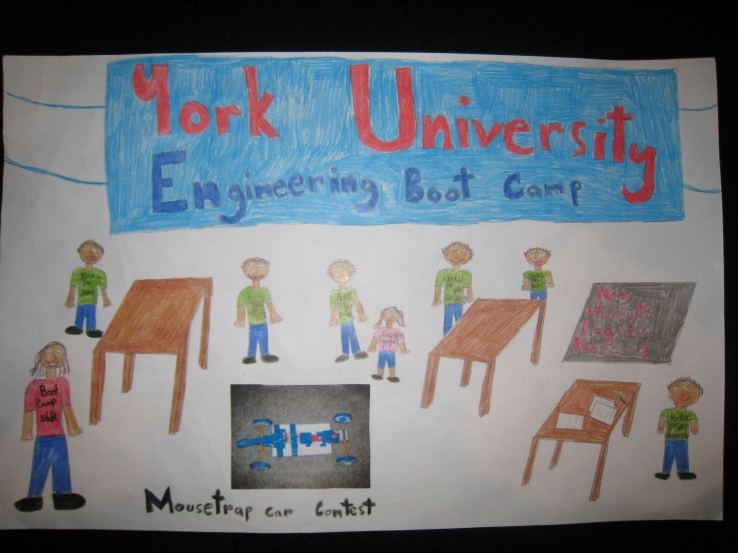 During July, I, a twelve year-old girl who was entering grade seven in the fall, was invited to take part in an engineering boot camp at York University designed for first-year university engineering students six years older than me. As I entered the room, everything looked and felt different. It was my first time being in an environment full of twelve six-foot eighteen year-old boys and no girls except for me and one of the organizers. I knew nobody. I was scared and nervous. My fright and nervousness wore off quickly when the university graduates who had organized this event rushed up to me and introduced themselves. When I had arrived (which was a few minutes after everybody else) the group was playing a version of bingo. Instead of regular bingo cards, the bingo cards had boxes with different characteristics marked on them, such as “someone who doesn’t have Facebook”, and the object of the game was to find a person who matched each characteristic and the story behind it. One of the rules was that you couldn’t use the same person for two different characteristics which meant that I had to walk up to complete strangers where I didn’t fit in and introduce myself. I joined in with the encouragement of the organizers. When the icebreaker was complete, the organizers gave us our assignment . We were given two hours in groups to build a car out of regular household materials such as washers, styrofoam, and rulers. The car had to be propelled forward by the force of a mousetrap. At the end of the two hours, we would have a race with the other groups’ cars without touching our prototype, and the design that would go the furthest would win. I was almost immediately invited into a group with three other boys who were entering York’s first-year engineering program that fall. As engineering students, those boys were more qualified to design a car than I was but they still treated me as if I had completed many high school science and engineering courses, involving me and asking me for my ideas. It was very interesting and a lot of fun to contribute ideas and build the car with people who I hadn’t met before. One of the ideas I contributed was an idea that helped stabilize our design and improved our chance of success. The group embraced my idea the first time I suggested it, as if I was their peer. Our car did not end up winning the race. However, our team probably learned much more than the more successful teams each time we designed our car. At the end of the event, the organizers explained that the purpose of the session was to allow new university students to meet each other before classes started so that they could learn to value everyone’s opinions and later benefit from each other’s ideas once classes started. On my end, the event gave me an opportunity to meet new people who share many of my interests but have more educational background than I do. It taught me to take every possible opportunity to do new things and also to ensure that I always go out of my way to be inclusive and include everyone around me. It felt great to be included, regardless of what I brought to the group, and in the end, when my team included me, they benefitted from my ideas. Everyone has a different perspective on life and everyone can contribute to team objectives in a different fashion. I am very glad that I went to the Engineering Boot Camp that day instead of the tennis camp I was supposed to go to; not only was it fun, but it was an eye-opening experience which taught me many valuable lessons, over and above the scientific skills, such as always doing my best to be inclusive of everyone, especially if they are different.