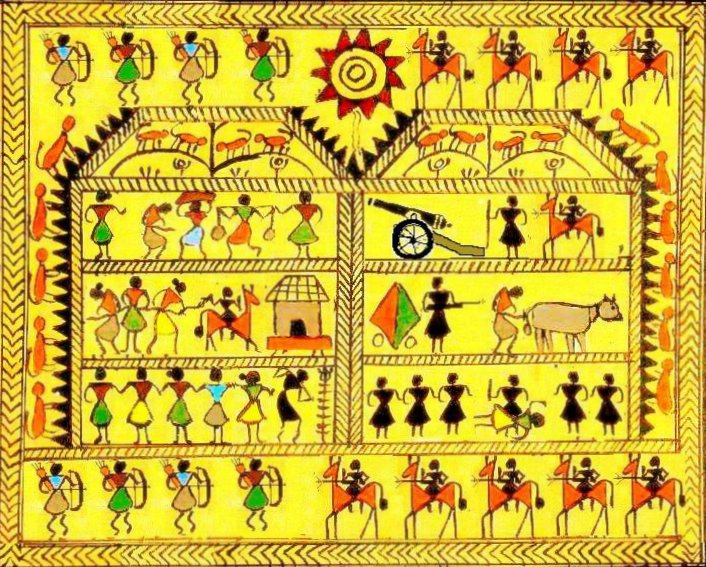 The painting is an expression of the liberation movement. The pattern is inspired from the “santal” tribal art. Santal are the indigenous people of India. Hul is a Santal tribe term. It means a movement for liberation. Santal Hul [1855] was one of the fiercest battles in the history of Indian freedom struggles causing greatest number of loss of lives in any battles during that time. The number of causalities of Santal Hul was 20,000. It was an unsung heroic episode in India's prolonged struggle for freedom. It was, in all probability, the fiercest liberation movement in India next to Great First Mutiny in 1857. With the capture of political power of India by the British East India Company, the natural habitats of the Adivasi (indigenous) people including the Santals began to shatter by the intruders like moneylenders. Traders and revenue farmers, who descended upon them in large numbers under the patronage of the Company. Believe it or not, the rate of interest on loan to the poor and illiterate Santals varied from 50% to 500%. These loans however how hard a Santal tried to repay never ended. In fact through corrupt measures of the money lenders it multiplied to an amount for which a generation of the Santal family had to work as slaves. Furthermore the Santali women who worked under labour contractors were disgraced and used . This loss of freedom that once which they enjoyed turned them into rebels and finally they took oath to launch an attack on these axis of evil The situation finally reached a flash point and, not surprisingly, a small episode that took place in July 1855 triggered one of the fiercest uprisings that the British administration ever faced in India. On 30th June 1855, a large number of Santals assembled in a field and declared themselves as free and took oath to fight unto the last against the British rulers as well as their agents. Militant mood of the Santals frightened the authority. A Police agent confronted them The angry crowd reacted violently and killed the Police agent and his companions. The event sparked off a series of confrontations with the Company's Army and subsequently reached the scale of a full-fledged war. The Santals showed great bravery and incredible courage in the struggle against the military. the whole party would stand and allow themselves to be shot down. The Santal Hul, however, did not come to an end in vain. It had a long-lasting impact. Santal Parganas Tenancy Act was the outcome of this struggle, which dished out some sort of protection to the indigenous people from the ruthless colonial exploitation.