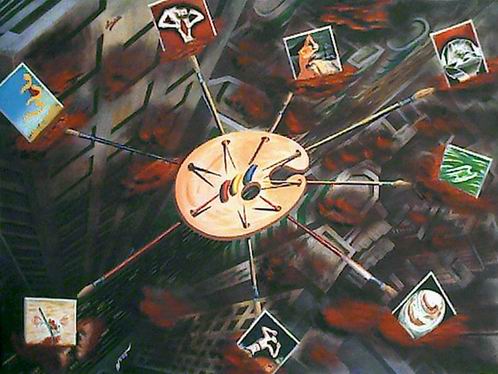 Save Our Souls. Technical Info: (H x W): 32" x 44" Year: 2003 Genre: Mysticism Style: Surrealism Technique: Oil On Canvas The Sun sent message to its Rays: "Oh my Rays! Since long you are exerting in exile in the gloomy atmospheres of the lowly, vile and ever changing world yet the unkindness of Era is adding up. Its not easy shinning over sand particles nor I find any comfort to you roaming about like morning breeze." There is an outcry from the Rays in reply; "Oh Sun! Though 'The West' has gained access to the secrets of light and they know well importance of light in their lives yet their skies are all covered with heavy smoke rising from their huge complexes which are busy in piling up heaps of ammunition and WMDs, sitting over which, planning eternal peace for themselves at the cost of humanity, their Rulers are un-slept. Misusing God-gifted intellect, asserting their own 'New World Order' (against God's World Order), dreaming rein the world they ruin it per will. Though sensibly they walk on Earth yet they don't see the signs of many a tyrant pharaohs gone earlier to them! In the recent days terrified of their own sinning acts, in the name of their own security, under the cloak of a self-derived, self-defined term 'Terrorism' these over-weening, self-acclaimed reformers of the world are seen beating about the bush, casting their forces fight against hidden warriors turning the entire globe a battlefield, making publics-n-republics feel unsafe, uneasy pushing the world to a war of civilizations known no winner, no end. The story doesn't end here, whims weigh on a whimsy hypothesis; Oh donnee Nations got WMDs! The bewailing blessed with adorned media silly drum beat, spending Billions of Dollars (which if spent for the welfare of humanity would have changed the fate of entire globe), profits them the dangerous pre-emptive strike rights...a new tool in their dirty hands whom loss of million lives means merely a test of their new lot of arms! Yet a darker rib of that, beyond their estimates even, surfaces; Following them, the other world Teddy Rulers have also started girding up their loins, putting lame excuses against neighbors in their armpit, harrasing them trying their arms. We feel shy saying further Oh Sun! An adding virtual grim, an outcome of misuse of the fair sex, dethroning her of her virtuous status of sister/daughter, meeting their lecherous ends, is also covering their morale skies. She also seems to be happy accepting lewdness as her fate, perhaps forgetting chastity that Holy Mary, The Holy Virgin laid. We are ashamed peeping down their Walled-n-Web; A 'Houseful' of ruinous and nudity as if tired of sexual acts and reacts they now, not being able to do, console eyes by nudes leaving no moment go waste. Still a more dangerous situation prevails; Their relished even, swept perhaps in 'free society' winds, finds no topic to express but reinous and nudity which is an alarming indicator of a social disorder of the society. And what a marvelous progress in manhood development! Their forefather claimed being Monkey's Spouse; Proving him wrong, contrarily, they made superb achievements reclaiming Donkey's peculiarities, of which round the clock silly and rude spam outflow, instigating men achieve donkey private parts, emotionalising innocent youngsters, discomforting elders and deteriorating societies worldwide, speaks of. Don't ask us of 'The East', Oh Sun! Though not immune to the joy of sighting, this part of the world is silent like Lahoot (the world beyond time and space). Poor here cannot find a moment free following bread while their wit immune Elite is wasting God-gifted treasures conspiring and calling their western Lords to fire and test fire their own populace providing cover to their own sinning deeds. To cut short, Oh Sun! Despite our vary endeavors the world is unlit, we confess we failed piercing such a heavy grim which the complainant of Ozone Layer has himself caused." "Despite your utmost achieving your mission you could not prove to be affective 'Ambassadors', Oh my Rays!" The Sun said, "Better come back home and be absorbed in my heart, the origin of brilliance, leaving the rough and ruin of the querulous cruel world to its fate."

Collections The Power of Media