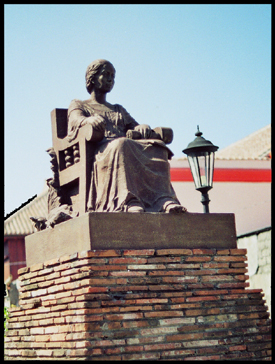 This is a granite statue of my grandmother, Leona Florentino (1849-1884), of Vigan, Ilocos Sur in the Philippines. Acknowledged as the mother of Philippine women's literature, she was exiled from her hometown because of her poetry as her ilustrado (landlord class) parents frowned upon early forms of women's self-expression. She started to write in Spanish and Ilocano when she was 10. Her poems came out in Europe in 1889, making her the first internationally recognized Filipino poet. As a woman forging a path in history, she is my pride and joy.

Collections Women's Rights: To Be A Woman