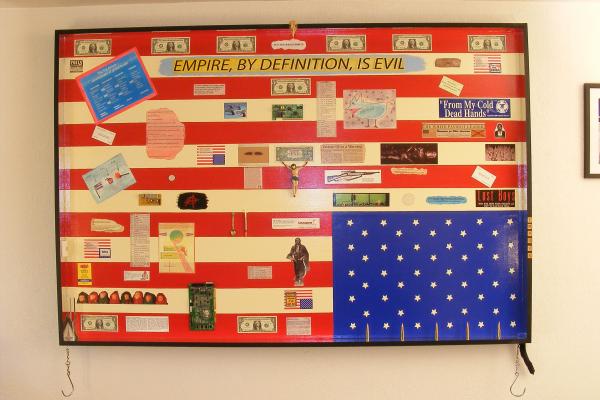 “empire” [ 2008 c.e. ] mixed media on canvas, [ acrylic, watercolor and oil,] with both found and fashioned objects: 6 ft x 4 ft with interactive electronic and manual sound devices... some words that may facilitate a more comprehensive understanding: -an upside down flag represents the distress of the country represented by the flag... -“custer died for your sins”, and o.j. simpson was acquitted for your sins as well, [ the kkk etc.]... -american empire lust was fired by the weasel phrase “manifest destiny”, ergo fuck “manifest destiny”, as empire = imperialism = evil... -racism = whitey rules, from babies on up the chain, [ and not being totally devoid of the desire for redemption,] “empire” displays 1 out of 8 babies with their eyes open... -computers represent the technological division, walls dividing human touch from human touch, the decline of physicality, the fast track to consumerism and the commensurate devaluation of humanity... -theism = discrimination, fear, cowardice, defiance of reality and what is knowable, [ relevant,] and a hotbed of violence, as all theism eventually breeds extremism... -animal tail = the primal state, [ morally,] of human savagery and reversion... -weapons and ammo = violence, aggression and the chronic lust for their use... guns, guns, guns, guns and more fucking guns; this is an aggressor nation... -how pharmaceuticals go to the instant grat mentality, or “control” of a problem rather than the character building hard work of existentialistic effort that should be employed towards the solution of said problem, [ drive thru mental health,] ie; the “easy fix”, and drains the spiritual*, [*non theistic,] gene pool to the point of no return... -native american applications go to this 2 faced aggressor nation’s birth via the ethnic cleansing of its indigenous peoples and built upon a constitution penned by white, male, racist and sexist power brokers, and does not fit even my minimal ideal of what is moral... -on the inside wall of the left vertical frame, there is “the doorbell to america’s soul”, which, when pressed, rings true its tone, but as in real life, no one answers, [ the absence of mass civil disobedience.]... additionally, below that, there is a removable tuning fork placed strategically next to the 1 baby with its eyes wide open, [ hope ?]... -the transcenderarts motif of mirrors asks again, “can you see yourself as part of the problem or the solution, [ are you guilty ?]... -the nra stickers, [ national rifle association,] and other connected allusions all speak for themselves and reiterates the lust for implements of destruction rather than the positive icons that should be in their stead... -population control, non violent activism, drug paraphernalia, currency notes, theist symbols, all go to the issues of gravamen that leave us on the long decline, and the end phase will render the roman version but a sunny day in the park...