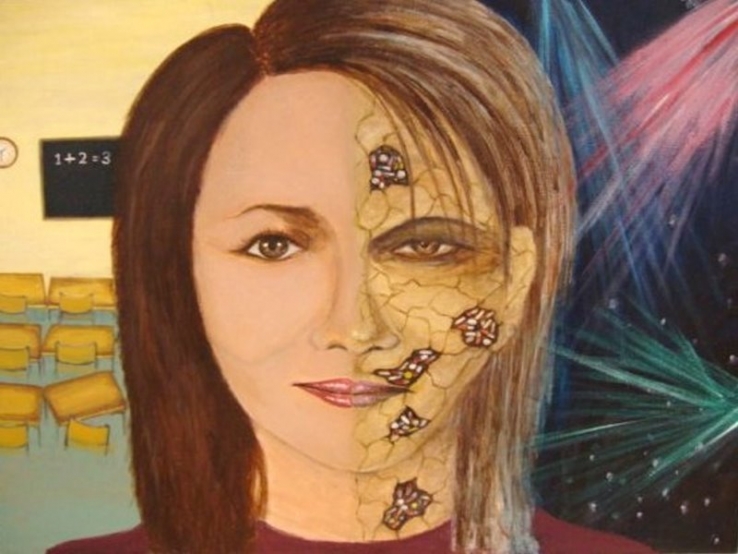 The social issue that I have chosen is drug abuse. For my first decision, I planned to draw the close up of a woman with two different conditions. One is a healthy woman and living normal and non- toxicity life so I finally drew a classroom with tables, chairs and blackboard. She has healthy skin. The other shows a woman with unhealthy life. I was decided to draw a healthy and perfect skin has turned into puzzles but I changed my mind because I think that drawing puzzles on the woman’s face is not realistic enough, therefore you had to make it into cracks In order to emphasize a deteriorated face due to drug abuse, and I also drew some drugs inside the cracks. The left side with a healthy woman still has a school as a background and the right side with a woman who obsessed about drugs still has a disco background. For the color, I finally used the warm colors like light yellow, brown and light green as the classroom background because it can shows a peaceful and warm atmosphere of the normal life with a healthy woman. For the healthy woman, I mixed brown with light yellow, white and red to create a skin color and I did use some brown to draw some shadow on it. For the disco background, I first paint dark blue as the base and I later painted some colorful lights on the top. For my conclusion, the difficulty that I had when I did this project is to paint the woman’s face of both sides because I think it’s hard for me to make it more realistic and to impress people about drug abuse. But I think my painting can bring out my message out and show the real side of drug abuse and discourage people not to take drugs.