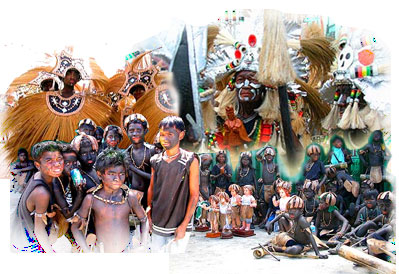 ATI-ATIHAN FESTIVAL - KALIBO AKLAN This began as a feast of reconciliation between the immigrant Malays from Borneo and the resident Ati until the Spanish injected some Catholic elements into it It is a three day colorful tribal feast events. It is a gigantic dance and masked ball, in which all inhibitions are thrown to the winds. Puera pasma! Hala Bira! Viva Santo Nino!. The rousing cries echo through the little town of Kalibo, until the drums fall silent and everyone collapses exhausted. A celebration honoring the Sto.Nino, a harvest thanksgiving, and a 13th-century friendship pact between the native aetas and the Malays. It can be considered the Mardi Gras of the Philippines: a weekend of uninhibited merriment, of endless parades and processions of grouped revelers, soothed and intricately costumed, marching an endless loop of streets, dancing to the continuous, rhythmic and hypnotic beating of drums, while countless Sto. Nino statues are carried by or hoisted over the parading crowds or pushed through small make-do floats. It is a non-stop hyperkinetic street celebration, from morning until dusk, gradually building to a maddening merging of dance, drumbeats and bacchanalia.