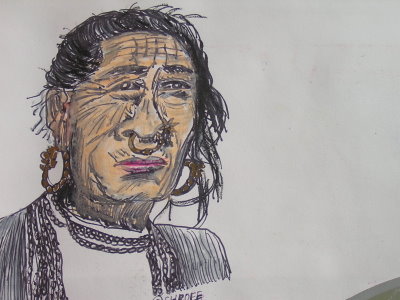 Here's what this piece of art means to me: A GURKHA MOTHER (Satis Shroff) (Death of a Precious Jewel) The gurkha with a khukri But no enemy Works for the United Nations And yet gets shot at In missions he doesn't comprehend. Order is hukum, hukum is life Johnny Gurkha still dies under foreign skies. He never asks why Politics isn't his style He's fought against all and sundry: Turks, Tibetans, Italians and Indians Germans, Japanese, Chinese Argentenians and Vietnamese. Indonesians and Iraqis. Loyalty to the utmost Never fearing a loss. The loss of a mother's son From the mountains of Nepal. Her grandpa died in Burma For the glory of the British. Her husband in Mesopotemia She knows not against whom No one did tell her. Her brother fell in France, Against the Teutonic hordes. She prays to Shiva of the Snows for peace And her son's safety. Her joy and her hope Farming on a terraced slope. A son who helped wipe her tears And ease the pain in her mother's heart. A frugal mother who lives by the seasons And peers down to the valleys Year in and year out In expectation of her soldier son. A smart Gurkha is underway Heard from across the hill with a shout 'It’s an officer from his battalion. A letter with a seal and a poker-face "Your son died on duty", he says, "Keeping peace for England And the Queen." A world crumbles down The Nepalese mother cannot utter a word Gone is her son, Her precious jewel. Her only insurance and sunshine In the craggy hills of Nepal. And with him her dreams A spartan life that kills. Glossary: gurkha: soldier from Nepal khukri: curved knife used in hand-to-hand combat hukum: Befehl/command/order shiva: a god in Hinduism

Collections A Gurung mother from the central hills of Nepal