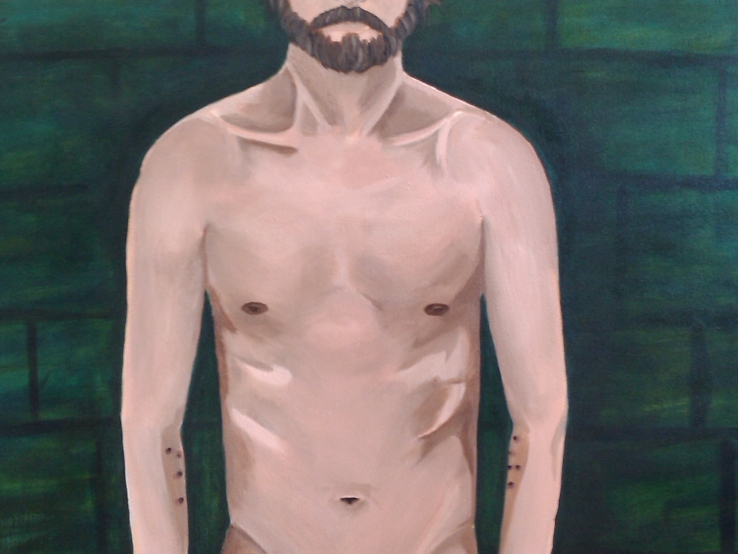 The issue that I am trying to portray in my painting is the effects that abusing drugs has on your body and how it affects you life. I am showing this by painting a man alone in a dark and gross room, he’s skinny and you can see how unhealthy he is with his body by the greyish colour of his skin as well as the tired expression on his face. Also the track marks on his arms which will really help make my issue clear, and show what abusing drugs will do to you. This man is alone and not in good shape. The reason why I chose such a simple title for my painting is because I am hoping that the message is clear when you look at the painting and that with a title called abused you instantly will understand what my painting is about. Abused is not only referring to the fact that he has abused the drugs but also that the drugs have abused him, by damaging his body. I got my inspiration for this piece from the book “Scar Tissue”. It is a biography of Anthony Kiedis’ life and his battle with drug addiction and how it really messed up his life at times. Weather it would be his body or his relationships with his friends and family. That book really made me get an idea of what he went through and what people who abuse drugs go thorough, not knowing when they’re going to get their next fix, or how their going to buy it because they don’t have money since they spent it on drugs. Also how they can end up alone because their friends are tired of the way they’re acting or constantly asking them for money. When starting this piece I had an image in my head of how I wanted the guy to look and how he was posing. I did have trouble that particular guy that I was thinking of so I had to create my own guy by using a face of a drug addict, someone else’s body for the pose and then another person’s body to get the size . As soon as I got him together I started with the outline of the background and then I started painting the man. First doing an under painting with primary colours and brown and then overlaying it with different shades of brown but still allowing the under painting to show trough a bit to get the different shades that the colours helped create. It took a few coats of paint until I got him to look the way I pictured him in my head. Since I was using three different men to create this one guy I had to continuously alter different parts of his body to make sure that he was proportionate. Over all I think that I did a good job with my painting, with the shading as well as the colours that I used. Some things that I would change would be that I would like more depth in the background and make the back wall to look a bit more realistic by putting more detail in the bricks. Other than that I am happy with the way that it turned out.